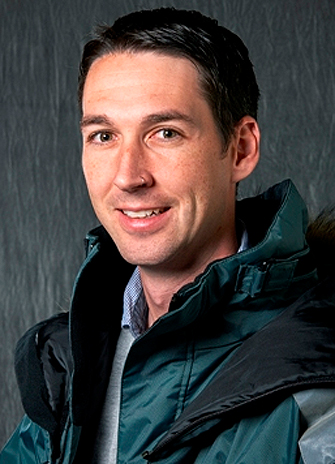 Appearing at regular intervals in YFile, Open Your Mind is a series of articles offering insight into the different ways York University faculty champion fresh ways of thinking in teaching and research excellence. Their approach, grounded in a desire to seek the unexpected, is charting a new course for future generations.

Today, the spotlight is on William Colgan, a professor in the Lassonde School of Engineering. Colgan studies glacier-climate interactions. He has just returned from a 36-day expedition to the Greenland ice sheet as part of the NASA FirnCover research team. Firn is the near surface layer of the ice sheet that covers 80 per cent of the surface of Greenland. While on the expedition, Colgan collected data to measure how firn density is changing in response to climate change.

A. I study glacier-climate interactions. I just returned from a 36-day expedition to the Greenland ice sheet as part of the NASA FirnCover research team. Firn is the relatively porous near-surface layer of the ice sheet. We travelled south-to-north on the ice sheet collecting shallow core samples and deploying instrumentation to measure how firn density is changing in response to climate change. Satellite observations can be used to document how quickly the ice sheet is thinning, but in situ data is needed to understand what fraction of this thinning is due to increasing firn density over time, rather than true ice loss.

A. I travelled to Nunavut to work as a hydrology assistant one summer during my undergraduate degree. The High Arctic was big and new to me. Passing through Resolute Bay, I met some University of Alberta glaciologists. I had had a wonderful time that summer, but they had even better stories and photos. So two years later I began an MSc degree in Earth and Atmospheric Sciences with that group at the University of Alberta.

A. Glaciers are now a charismatic symbol of the rapidity and magnitude of climate change. Increasing mean sea level globally, as well as decreasing water resources in many regions, make understanding glacier-climate interactions a pressing topic. My sense is that the glaciology community feels an urgency to its work, which is evident in a move away from hypothesis-based research toward objective-based research. For example, 30 years ago people were saying “why does a glacier behave that way?” but now people are saying “tell me how that glacier will behave.”

A. Working with the FirnCover team, we are trying to bridge the divide between in situ sampling and satellite measurements. As in many fields of the earth sciences, the vastly different spatial scales and techniques used in field versus satellite science can make it hard to bridge the gap between people comfortable deploying field instrumentation and those running big-data algorithms on higher performance computers. On the FirnCover team, researchers do both. The same hands that deploy sensors also debug numerical code. This makes our team really aware of the strengths and weaknesses of both the in situ and satellite data.

Q. How does your approach to the subject benefit the field?

A. Right now the field data and subsequent algorithm improvements coming from the FirnCover expeditions represent the best opportunity to correctly calibrate the Greenland ice sheet mass loss assessed by the NASA ICESat-2 and ESA CryoSat-2 altimetry satellites. This means many researchers are closely following the hybrid field-code approach of the FirnCover team.

Q. What findings have surprised and excited you? (i.e. tell us about the most interesting finding, person and/or place you encountered while pursuing your research.)

A. On our FirnCover 2016 expedition we visited the new EastGRIP drilling project in far northeast Greenland. EastGRIP is a European collaboration to drill the sixth deep ice core through to the bed of the Greenland ice sheet. We were on site installing FirnCover instruments and collecting data, but we had a chance to visit the tunnel network they are constructing for the four-year drilling campaign. It was a very unique exposure to the people and infrastructure involved in a Tier-1 international research collaboration.

A. Weather seems to be the biggest challenge to any expedition to the Greenland ice sheet. Storm periods, when we are tent-bound for one to several days, clearly limit our ability to collect data. But there can also be knock-on scheduling effects related to weather, like when a charter aircraft is delayed at a different site due to weather elsewhere. Responding to weather challenges can require some serious flexibility. One evening at Summit Station during FirnCover 2016 we received notice at 2200 hours advising that our plane was being recalled back to the coast at 0800 to escape an approaching storm. (There is no hanger at Summit, so aircraft can be rather exposed just sitting on the ice sheet.) We still had some work to do, so we worked through to the wee hours of the morning. It was -32 degrees C that night and we were slightly short of breath at 3,200 m elevation, but the FirnCover team appreciated that collecting the data was paramount.

Q. How has this research opened your mind to new possibilities or new directions?

A. As I have delved deeper into the historical literature associated with ice sheet research, I have become increasingly interested in leveraging well-documented legacy data for new purposes. For example, the US Army Corps of Engineers produced an abundant volume of ice sheet and climate data during their Cold War-era attempt to colonize the ice sheet with roads and bases. The FirnCover team is starting to pore through these documents with fresh eyes and finding some true research gems. For example, the predilection of the Army Engineers to collect firn density profiles for structural analysis for building on the firn is proving to be a very useful source of firn density records. Tracking down and digitizing these legacy data are allowing us to directly compare our 2010s observations of firn structure to 1960s baseline observations.

Q. Did you ever consider other fields of research?

A. I am teaching Dynamic Earth and Space Geodesy (ESSE1010) in the fall of 2016. I  spend half the course sharing my fondness of satellites with the students. I want them to appreciate the different orbitals and sensors, and understand that the Hollywood penchant for depicting scenes with a downward-looking video feed is just not possible from satellites orbiting at two km per second. Since it is a first-year survey course, I limit cryospheric content to about 10 per cent. I am also teaching Climate and Climate Change (ESSE4160) in the fall of 2016. I spend virtually the entire course going through the Intergovernmental Panel on Climate Change (IPCC) Fifth Assessment Report with students so they can craft an informed understanding of not only the processes studies and data types used by the IPCC, but also the consensus-based deliberative political framework in which the volumes are crafted. Since it is a fourth-year specialized course, it more strongly reflects my research interests than my first-year course. I will be blending FirnCover 2016 photos and stories in with material from previous expeditions in both these courses.