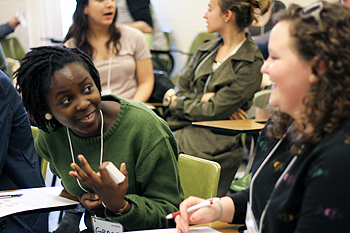 More than 250 student leaders from across York University participated in Peer Leadership Training at the Keele campus on April 22. Peer Leader Training (PLT) is a full day of training delivered to York students who hold a peer leadership role on both campuses.

Participants were new and returning student leaders from various departments, colleges and faculties. Despite the early morning start, their enthusiasm was palpable.

After a light breakfast, York alumnus and sports entertainment attorney, Layth Gafoor (BA ‘02, LLB ’06) delivered the leadership keynote to students. He began by inviting volunteers to join him in singing the chorus of Purple Rain as a tribute to the late pop singer Prince. Gafoor then spoke to student leaders about their role as servants to others and the fallacy of control and planning.

Gafoor shared anecdotes from his time as a student leader at York, including the time a parking ticket he received in his first year inspired him to run for president of the York Federation of Students and the Board of Governors. Since then, Gafoor dedicates himself to “tweaking the system” within the field of law and politics. In his message to students, he stressed the importance of serving with intention and encouraged student leaders to reflect on why they want to serve the York community.

“The piece of advice that most resonated with me was when Layth spoke directly to the women from minority groups in the room. I really appreciated when he acknowledged the barriers minority women face in the workplace and I was inspired by Layth’s encouragement to seek out mentors, especially male mentors who can be valuable allies to female leadership,” said Clivane Previlon, a fourth-year student leader.

The remainder of the day consisted of three breakout sessions that provided students the opportunity to engage with their peers while gaining knowledge and skills to be effective peer leaders.

In one session, leaders explored notions of helpfulness which include active listening, confidentiality, empathy and setting boundaries. Through an interactive Jeopardy styled game, students also refreshed their knowledge about campus services and resources. In another session, students reflected on their current self-care habits and brainstormed new strategies to maintain well-being.

“The greatest takeaway that I learnt from the self care exercise was that I wasn’t the only one going through some of the everyday struggles I go through,” said fourth-year student and returning peer leader Jeff Thammavongsa. “I think that feeling of not being alone and feeling like other leaders are there with you, searching for an answer is a reward and comfort in itself. Having others work together through this exercise to find the answers to help each other was pretty motivating. It was a good sight to see.”

Students also composed vision statements and created action plans for their roles as peer leaders during the upcoming 2016-17 academic year. In doing so, they reflected through a “card sort” activity to determine which skills they might want to focus on for the new academic year. Priscila Jaquerz, a fifth-year peer leader said, “I really liked that I am starting my peer leadership role with intentional goals that are meaningful to me, not just for my position, but my personal and professional development and growth.”

Primarily organized under the leadership of Catherine Salole, director of Student Success Strategies, the Peer Leadership Training is developed, approved and delivered in conjunction with the members of the Peer Leader Community of Practice, which is comprised of some 77 peer leader educators,coordinators and managers from across Keele and Glendon campuses.