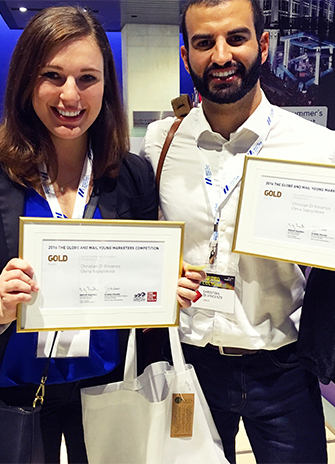 Olena Sapojnikova (BBA ’13) has always had a passion for cars.

Her first job was at an auto mechanics and she continued to work in the industry as an undergrad at Schulich, doing everything from getting her hands dirty repairing cars to managing the numbers as an accountant.

Now working for Lexus Canada as a digital marketing consultant, the self-described car aficionado is right at home.

Sapojnikova, who is now taking the Accelerated 8-month MBA at Schulich, won the Young Marketers Competition sponsored by The Globe and Mail. Sapojnikova earned the top spot out of 340 entries, and will represent Canada with her partner Christian Di Vincenzo in the international case competition, being held in Cannes in June.

The competition challenged participants to get children outside and active using their company’s brand and target market.

In Cannes they will compete against teams from 60 other countries. However, making it to this prestigious case competition and competing on the global stage is an achievement Sapojnikova will cherish for the rest of her life.

“It is the biggest event in advertising and marketing in the world, so just having the chance to be a part of the event is an honour,” she said. “It is a big boost to my career and it was the skills I acquired at Schulich that helped me stand out.”