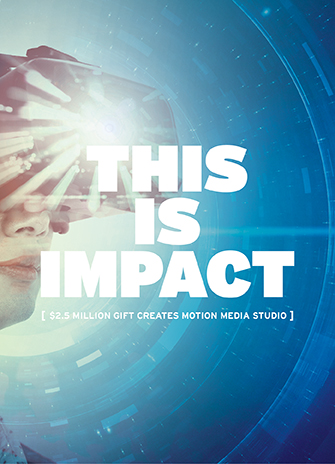 York University announced last week a $2.5-million gift received from the Mirkopoulos family of Cinespace Film Studios in support of the School of the Arts, Media, Performance & Design (AMPD). The donation will go towards the creation of the York University AMPD Motion Media Studio, to be established at Cinespace Film Studios’ Kipling Avenue complex.

“Thank you to the entire Mirkopoulos family, as well as Cinespace, for this incredible contribution to our students and our future,” said York University President and Vice-Chancellor Mamdouh Shoukri to guests during the May 25 announcement. “Your support is leading the way for others to see the impact that is possible at York University.”

The AMPD Motion Media Studio @ Cinespace will provide students with the opportunity to explore moving image production including 3D stereoscopic cinema; virtual, augmented and mixed reality; interactive performance; gaming; interactive data visualization, and more. Located next to Cinespace’s commercial sound stages, the new facility also opens doors to professional learning opportunities such as master classes with industry partners like directors, producers and cinematographers. Additionally, AMPD faculty members will use this space to build on fundamental research and to develop innovative and technology-enriched courses.

The University’s partnership with the Mirkopoulos family and Cinespace began in 2001, when the company made generous gifts to support student awards, a commitment that continues to this day with the Cinespace Studios Film and Video Production Award and the Cinespace Studios Graduate Award in Film and Video Production. Understanding how important it is for emerging artists to have a platform for their work, Cinespace founder, the late Nick Mirkopoulos, made his company the founding sponsor of CineSiege, the annual, professionally juried student film showcase of AMPD’s Department of Cinema & Media Arts.

In addition, the Mirkopoulos Family and Cinespace were major contributors to the building of York’s Accolade Project, which created the most extensive postsecondary arts school facilities in Canada, and houses the Nick Mirkopoulos Screening Room.

AMPD Dean Shawn Brixey was also on hand to underline the importance of the family’s steadfast support for the University and for AMPD students.

“The Mirkopoulos family and Cinespace Film Studios are true kindred spirits to AMPD. They share our view that students are artists and creative forces in their own right, that state-of-the-art facilities support the creation of powerful and innovative technologies, that strong connections between industry and education are key to supporting our emerging cultural leaders, and that creativity is today’s most in-demand and sought after skill.”

The announcement event, which saw more than 80 guests, featured live demonstrations of many of the exciting technologies that this new facility is equipped to provide to AMPD students. This included a demonstration of the OpenStage2 markerless motion capture technology created by New York-based company Organic Motion, which eliminates the need for bodysuits and markers currently used for film animation. Guests were also treated to exclusive set tours of the CBS mystery show American Gothic.

This gift comes at an opportune time in the University’s journey, particularly with last month’s launch of Impact: The Campaign for York University, a $500-million fundraising and alumni engagement campaign. This campaign celebrates the University’s impact on the world – past, present and future – and acknowledges donors and alumni, including Bryden Alumni Award recipient and member of the Campaign Cabinet Steve Mirkopoulos, whose financial support has contributed to this remarkable success.

According to Brixey, the Mirkopoulos family’s impact at York University is clear. “Thanks to the generous support of the Mirkopoulos family, the Motion Media Studio @ Cinespace will electrify the imagination of a new generation of artists and prepare our students to be front runners in tomorrow’s creative digital sphere.”