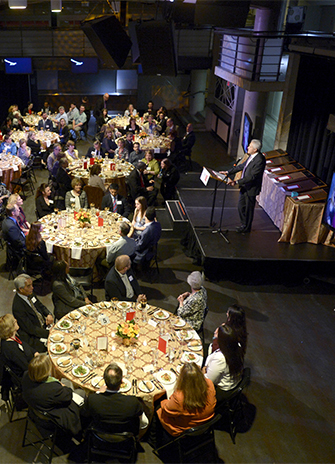 It is one of the highlights of the academic year and a time when the University community pauses to recognize, thank and celebrate outstanding employees for their work.

On May 5, at The Underground Restaurant, five individuals and one team were lauded for their exceptional service to York University during the President’s Staff Recognition Awards dinner. In total, 28 individuals and five teams were nominated by their colleagues for the prestigious awards. More than 150 guests including recipients, their families and friends and nominees attended the event, which was hosted by York President and Vice-Chancellor Mamdouh Shoukri, who also presented the awards (with the exception of the Ronald Kent Award, which was presented by President Emeritus H. Ian Macdonald).

With a huge smile, Shoukri addressed guests. “As you know, this is one of my favourite events of the year. It is an opportunity to thank our colleagues who make this place work. It is really wonderful to see so many of you here today,” he said. “This event is very important to the University.

“The people who we are recognizing tonight are those individuals who put extra effort to ensure that York University continues to be run smoothly and efficiently,” said Shoukri. “They display a tremendous amount of leadership and commitment to York University. There is nothing more valued than receiving recognition by one’s own peers. Thank you for everything that you do!”

The recipients of the President’s Staff Recognition Awards are listed below (in order of award presented). Click on the award names to view video testimonials for each recipient. The videos were created by Learning Technology Services in collaboration with the Office of the President.

For a full list of nominees, see the announcement in the March 16 YFile.

During the dinner, the guests were treated to videos that described each recipient and offered messages of support and thanks from nominators and colleagues. Following each video, the president presented the awards and the recipients then offered a few words to the gathering.

“I just want to thank the president and the various people who create these awards for staff. I think it is really important, especially at a University of this size, to have the great contributions of staff recognized,” said Tam, who paid tribute to her fellow nominees and past recipients of the Deborah Hobson York Citizenship Award. “This is a great, great way to recognize excellence at York University.”

Speaking on behalf of the Advancement Research and Records team, Briand thanked the nominators and the president and took time to congratulate the other nominees for the award. “Our team works very hard and we are focused on service,” said Briand. “This has been a wonderful experience for us to receive this award, particularly for the department.”

Briand took time to speak about each of the team members. “Collectively, we do our work to make York a better place. It is amazing to find an alum who has done something really interesting, operated a great business, won an award, or as our recently launched campaign says, has had an impact. Finding that person and getting them engaged with the University is an awesome feeling,” he said.

A soft-spoken Leung shyly thanked his nominators and spoke about his pride in receiving the award. He said the award was not only for him but also for all of his colleagues in Campus Services and Business Operations.

Another of the recipients, Del Biondo said she was overwhelmed with the news that she had received the award. “All the paper and words in this universe would not be enough to truly express my gratitude. I am honoured to be here tonight,” said Del Biondo, who took time to thank her co workers who nominated her.

Hartley also thanked her team for nominating her. “I feel so lucky because the group of amazing individuals who were nominated for this award… well, I have no idea how the selection committee came up with their decision. I hope that all of my fellow nominees feel as lucky and a winner as I do,” she said. “What was so special about winning this award was the email that I received from the broader York community. It made me realize that the clinic has become part of the fabric of the University and I am very proud of that.”

To round out the evening, President Emeritus Macdonald presented the Ronald Kent Medal to Hunter.

“When I start out every day, there are two things on my mind,” said Hunter. “One of them is to try to do a good job and the second is don’t make a spectacle of yourself. As I stand here in front of you, I think I am going to have to reevaluate the second thought.”

The evening concluded with congratulations from Shoukri and a toast by York Vice-President of Finance and Administration.

Shoukri thanked TD Meloche Monex, one of the University’s affinity partners, for their long-standing support of the awards reception.