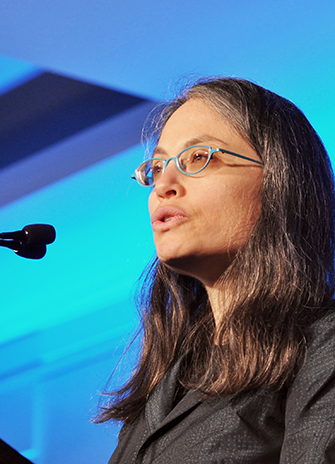 Political science Professor Leah F. Vosko, from the Faculty of Liberal Arts & Professional Studies (LAPS), is the first recipient of the Charles Taylor Prize for Excellence in Policy Research.

Awarded by the Broadbent Institute, the prize is presented to a researcher whose work has made an important contribution to public policy research that advances social justice in Canada.

Vosko is a Tier 1 Canada Research Chair in the Political Economy of Gender & Work. The prize recognizes the impact of her ground-breaking research on labour market insecurity.

Renowned philosopher and award namesake Charles Taylor presented the prize to Vosko at the Progress Summit in April. During the summit, Taylor spoke of the impact of Vosko’s research on our understanding of precarious employment and on public policies that support improved conditions of work and employment.

“Leah Vosko is exactly what we need in the academic world – someone whose work produces leading scholarship rooted in real world concerns,” said Taylor. “She’s been a pioneering scholar in the whole area of precarious work and what it means for the people involved… We need strong policy research to see how to deal with this [phenomenon], and this is what Leah Vosko is providing.”

Recently named a Fellow of the Royal Society of Canada, Vosko currently leads a major research partnership on employment standards involving the Ontario Ministry of Labour, community legal clinics, workers’ organizations and researchers from seven Ontario universities, titled “Closing the Enforcement Gap: Improving Employment Standards Protections for People in Precarious Jobs”. She is also director of the Employment Standards Database (ESD), a sister project of this partnership that is being developed to provide researchers with a powerful new tool to conduct high-quality research on employment standards across national contexts.

In her address upon receipt of the prize, Vosko said, “When I learned about this prize, two things pleased me very much: first, it symbolized for me that there is finally greater awareness of the magnitude of precarious employment; and, second, that there is a growing consensus on the need to confront this profound social problem.”