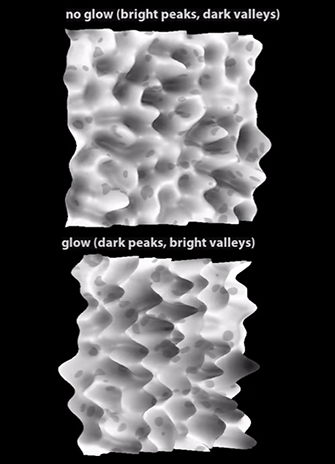 Researchers out of York’s Department of Psychology and Centre for Vision Research have determined that visual perception of glowing surfaces can be “switched on and off” through perceived 3D shapes.

PhD student Minjung Kim was the lead author on the study performed in Professor Richard Murray’s lab. Murray, along with Professor Laurie Wilcox, co-authored of the study, which appears in the publication Current Biology.

“It examines how people can tell that an object is glowing – that is, creating and emitting light instead of simply reflecting light from the environment around it,” said Murray. “Our work shows that glow perception is more sophisticated than researchers have previously thought.”

Most surfaces reflect light from external sources, but others emit light – or glow. The team of researchers used computer-generated images of wavy surfaces and created “dark-valley” images and “bright-valley” images.

“Suddenly, the images looked like translucent, glowing surfaces that emitted light from a source inside or behind them,” said Murray.

These results, he said, are significant because the dark-valley and bright-valley stimuli are almost identical, except for their 3D shape. The experiments show glow percepts can be toggled on and off by changing the three-dimensional shape of a surface and keeping everything else about the image the same.

“This advances our understanding of human vision, as it reveals some of the cues that the visual system uses to solve the difficult problem of seeing light sources and shapes in complex images,” he said. It goes beyond the visual perception of brightness.

The team created a YouTube video explaining these findings and shows the dark-valley and bright-valley images used.