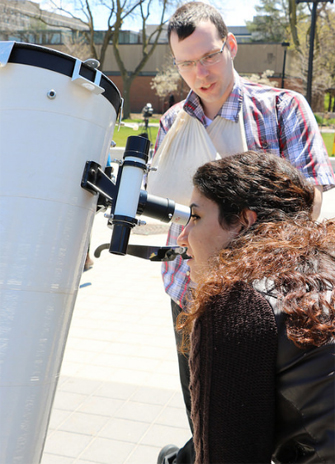 York University astronomers arrived at the crack of dawn on Monday to prepare for the rare transit of Mercury across the face of the Sun. They were part of a global group of observatories and astronomers who took time to observe the tiny planet as it steadily made its way across the 1,392,000 kilometre (km) face of the Sun. Mercury, which resembled a small black dot, could be seen moving in a deliberate path across the Sun’s vast face. It was travelling at a good clip of 162,000 km an hour, and began its transit at 7:12am, completing the journey at 2:42pm.

Several hundred people dropped by to join the York astronomers and members of the York University Astronomy Club. Some like filmmaker Matthew Scatterty, came from as far away as Niagara Falls. “I watched a live stream for a previous event and got hooked,” he said. “So I joined the Astronomy Club at York University. Many people are unaware that it is open to the general public. It has been an awesome experience.”

The Astronomy Club also convened an online chat and provided a live feed of the transit, which was watched by grade school science classes, astronomers and observatories around the world. A camera was mounted at the back of a 480mm telescope equipped with a solar filter (a Meade Instruments Series 6000, with a focal length of 480mm) in order to provide the feed. The entire apparatus, which was situated in one of the two domes at the York University Astronomical Observatory, tracked the Sun and Mercury’s progress. Observatory telescopes equipped with solar filters and the astronomy.blog.yorku.ca live feed continued throughout the day. Solar glasses were  made available for everyone attending. The main scoreboard at the stadium also displayed the event.

Usually reserved for Monday nights, the club’s live feed normally runs from 8:30 to 10pm in conjunction with an online radio show hosted by the club and the York University Astronomical Observatory. On Wednesday evenings, the observatory hosts an Online Public Viewing. Both events are free and open to the public and are highly popular with astronomers. Monday’s transit of Mercury was no exception with several hundred tuning in to watch the event and chat with York astronomers. The live feed saved the day for astronomers working in the observatory in Byron, Illinois and those situated in parts of the United Kingdom, as both regions were overcast and viewing the transit was rendered impossible.

“Today, we have 10 staff here by the York Lions Stadium and in the observatory. There has been a steady stream of people visiting, about 20 to 30 each hour and there are several hundred people in the chat room,” said Paul Delaney, director of the York University Astronomical Observatory and the Division of Natural Science in the Faculty of Science.

Mercury is the smallest planet in the Solar System and is closest to the Sun. Its orbital period is 88 Earth days, which is much faster than any other planet. Mercury has no moons and is named for the Roman god Mercury. One day on Mercury lasts 59 Earth days. Mercury is situated about 77 million km away from Earth and sits about 57.9 million km from the Sun.

The York University Astronomical Observatory and the Astronomy Club at York University presented the Mercury transit event in cooperation with York’s Athletics and Recreation Team. For more information on this and other events, email observe@yorku.ca.