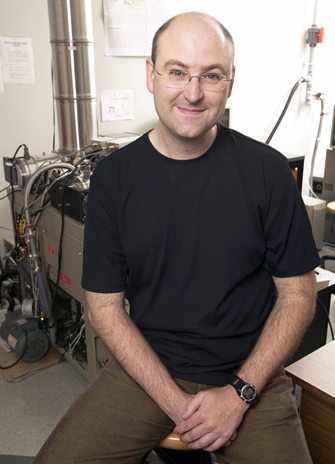 Thanks to a research and travel grant from the Burroughs-Wellcome Fund (BWF), Logan Donaldson, professor in the Department of Biology, Faculty of Science, is on route to Poland this month to study E. Coli strains that cause food poisoning.

Donaldson and his team at York are experts in using Nuclear magnetic resonance (NMR) spectroscopy and other techniques to determine the atomic structure of proteins involved in brain cell signaling and viral function.

“Just like the saying ‘A picture is worth a thousand words,’ the detail I gain from my research allows my team to understand the relationship between a protein’s architecture and its function,” explains Donaldson.

The new funding from BWF has provided him with an opportunity to initiate a new research partnership with Grzegorz Wegrzyn’s laboratory at the Katedra Biologii Molekularnej, University of Gdansk, Poland.

Donaldson met Wegrzyn’s team at a conference in 2015, where he shared some of his earlier published research on a viral protein called Ea8.5. This meeting sparked a collaboration between the two teams to explore the molecular differences between clinical strains of E. coli and those normally found in our intestines.  Most of the time, infection with a pathogenic strain of E. coli, such as O157:H7, results in a few days of abdominal discomfort; in children and the elderly, there is a risk of kidney failure and death.

Specifically, Donaldson and Wegrzyn are studying a genetic region called exo-xis that is known to affect the life cycle of the harmful E. coli strains, although it is unclear how this is accomplished.

“When we embarked on our research, we weren’t sure what the exo-xis region did,” says Donaldson. “However, my research group recently found that there are a set of proteins made by the region, and we have made progress towards determining these proteins’ atomic structures and functions.”

He is travelling to the Wegrzyn laboratory this month to share his new insights with his collaborators and learn about their findings.

The trainees at York University involved in this research include undergraduate science students Shailee Perez and Ali Rizvi (also 2015 NSERC USRA recipients), and Ludimila Golodetzi, a PhD student in the Department of Chemistry.