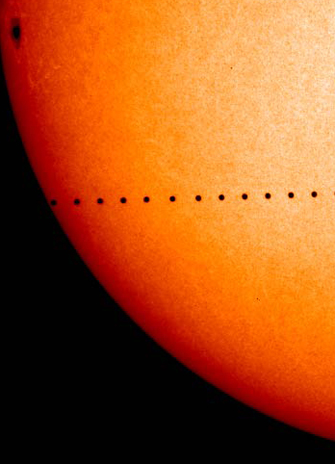 Mercury transits the Sun as seen from Earth in 2006. Credit: ESA NASA SOHO

The York University Astronomical Observatory and the Astronomy Club at York University in cooperation with York’s Athletics and Recreation Team invites the community to join them in watching the planet Mercury in transit across our Sun on Monday May 9.

“Observing the Mercury transit reveals one of the fundamental ways we detect exoplanets orbiting other stars,” said Paul Delaney, director of the York University Astronomical Observatory and the Division of Natural Science in the Faculty of Science. “This event highlights the gravitational embrace stars have for planets and how we can learn so much from such simple observations.”

The last time Mercury made the move was in 2006 and while the next time such an event will be visible in Canada occurs is 2019, after that we will not be able to see such a transit “at home” until 2049.

Observatory telescopes equipped with solar filters and a live feed (astronomy.blog.yorku.ca) will be in place at York Lions Stadium, from 9am to 2pm, with solar glasses available for everyone attending. The main scoreboard at the Stadium will display the event with seating available in the west facing stands.  This is a free public event with knowledgeable students and faculty available to answer questions.

Since the orbit of Mercury lies inside of Earth’s orbit, Mercury passes between Earth and the Sun about 13 times per century. The combination of Mercury’s orbital period and orbital inclination with respect to Earth give rise to the relatively low number of such transit events.  From Earth, observers will see this as a small black dot moving slowly in front of the Sun.  Toronto is well placed to observe the entire eight-hour event.

The actual transit will start at 7:12am and end at 2:42pm EDT. For more information, email observe@yorku.ca.