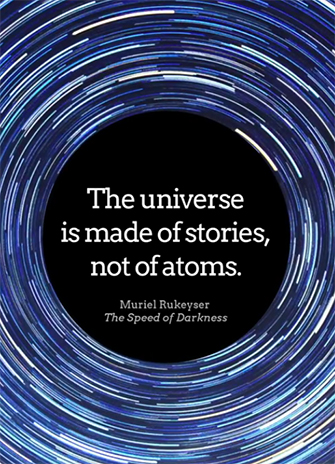 Buchbinder’s sweeping interactive documentary, Biology Of Story, is a unique new online resource that takes us deep into an exploration of story in art and life, up to and including the latest technologies. This vast, networked archive of over 1,200 media works features video interviews with more than 100 practitioners and thinkers who work with story in a wide range of fields: screenwriters, novelists, storytellers, physicians, clergy, scientists, journalists, lawyers and more.

The interviews support and enrich Buchbinder’s premise that stories form through the patterns of self-organization and interdependence that also define biological life. And that human beings also create anti-stories: formulaic and fundamentalist narratives that lack these living qualities.

The wide-ranging ideas and speakers profiled in Biology of Story include Niigaanwewidam James Sinclair, professor of Native Studies at the University of Manitoba, who explains the Anishinaabeg understanding of story, and Marina Cantacuzino, founder of the Forgiveness Project, on helping people reclaim the power of their personal narrative. Novelist Philip Pullman (His Dark Materials) shares his thoughts on the mysteries of inspiration, and Jonathan Halliwell, professor of Theoretical Physics at Imperial College, London/UK, discusses the importance of story in allowing us to experience our connection to the universe. Alex McDowell, production designer for films by Steven Spielberg, Wes Anderson, Terry Gilliam and others, and director of the World Building Media Lab at the University of Southern California, speaks to narrative world building and new forms of creative collaboration.

The material is organized by interconnected themes within a visually stunning, content-rich, non-linear interface created by Buchbinder in collaboration with Helios Design Labs, one of the world’s leading builders of interactive documentaries.

Buchbinder launched Biology of Story last month at South by Southwest (SXSW), a leading-edge music, film and technology festival held annually in Austin, Texas. A highly anticipated industry event and public showcase, SXSW is attended by media and tastemakers from around the world.

“The launch was exciting,” said Buchbinder. “SXSW selected Biology of Story as a highlight of its interactive program. That was an ideal launch pad for us because, like Biology of Story, the festival’s interactive program focuses on the convergence of different fields. Our 200-seat hall was standing-room-only half an hour before our scheduled start. It was amazing to connect with such an intrigued and engaged audience.”

Supported through a $440,000 research/creation grant from the Social Sciences & Humanities Research Council of Canada (SSHRC), Biology of Story represents three years of intensive, collaborative work. More than a dozen York University Cinema & Media Arts students and recent graduates have been employed on the project. The genesis of Biology of Story lies in Buchbinder’s critically acclaimed book, The Way of the Screenwriter (House of Anansi Press, 2005), which includes a chapter on “Story vs Formula”.

“The book is about the craft of screenwriting, and it grew out of my own work and conversations I had with students” said Buchbinder. “My screenwriting pedagogy is shaped by the metaphor of story as a living thing, and that chapter outlines how I account for narratives that clearly lack the properties of life.”

His writing and thinking on the subject became so extensive that he saw he had another book in the making. But when he sat down to write, he realized the issue was too big to explore from only his own point of view. The project evolved from book to interactive documentary, and Biology of Story was born. And like a living thing, it will keep on growing and evolving.

Buchbinder is continuing to create more materials, and the website has a Commons section where users can create accounts and playlists, engage in discussion and give feedback. Buchbinder is also working on a companion book and developing several pedagogical initiatives rooted in the project, including a fully online first-year course on the Biology of Story, open to students across the University, to be offered by the School of the Arts, Media, Performance & Design starting this fall.

The project’s next public presentation is Saturday, May 7, when Buchbinder brings his “interactive performance” of Biology of Story to Toronto’s Pages Unbound festival. The event takes place at 2:00pm at the Art Gallery of Ontario’s Jackman Hall, 317 Dundas St. West. Admission is $10, or with a Festival Weekend Pass.