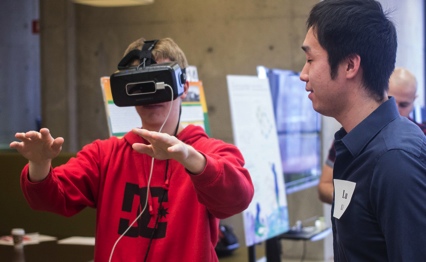 York’s fourth annual multidisciplinary Undergraduate Research Fair, organized by a team of faculty, librarians and students, took place in the Scott Library Collaboratory on Feb. 24.  More than 500 University community members braved the snowy weather to celebrate the work of 69 students, who presented their research projects in the form of poster sessions, animated with enthusiasm and commitment.

The presenters were drawn from all Faculties and both campuses, and the 56 posters covered a wide range of topics. Some of the presentations were: Dance the private tango; Safe Space at York University; Hearing the forest through the trees;  Let’s talk about sex: Black women authoring their own sexuality; No one is illegal: Is this grassroots migrant justice group effective?; and Can you afford opportunity? Documenting the cost of subsidized housing – to name but a few of the many topics covered.

University Librarian Joy Kirchner welcomed students and congratulated them on being selected to participate in this juried event. She noted that, by attending an intensive fair preparation workshop and gaining experience designing and presenting a scholarly poster session, the students were building skills in the academic literacies and participating in the cycle of knowledge production and dissemination. She noted that the York Libraries staff and faculty were thrilled to offer this opportunity for students to share their research outside the classroom in a cross-curricular environment.

York University’s Vice-President Research and Innovation Robert Haché and co-sponsor of the fair, congratulated all of the students who participated and said he was delighted to see the depth of research undertaken. The projects on display showcased a wide spectrum of innovative and engaging work. Haché underlined the University’s commitment to ensuring that undergraduates have opportunities to engage in cutting edge and interdisciplinary research.  “It is events like this one,” he said, “that help to showcase the vibrant, dynamic and collaborative research community at York.”

Students themselves commented enthusiastically on the Undergraduate Research Fair experience, noting that it was “an invigorating experience to talk to faculty, parents and local community members about research.”  Others called the experience “fantastic” and “one-of-a-kind,” and wished they had a chance to do it all again. Several remarked that they appreciated learning about other people’s work and seeing the research that happened in other disciplines, and found presenting at the fair both rewarding and fun.

All presenters will receive an invitation to attend a Writing for Publication workshop organized for them by Writing Department Chair Ron Sheese. Interested students can rework their Undergraduate Research Fair project for consideration for publication in Revue YOUR Review. The abstracts and posters of participants will be published in a separate section of the journal (YOURreview.journals.yorku.ca).

The numerous, high-calibre presentations made it very difficult for adjudication teams to select the first and second prizewinners of the following eight awards, presented at the Undergraduate Research Fair:

Fair organizers agree that all presenters at the 2016 Undergraduate Research Fair were winners.