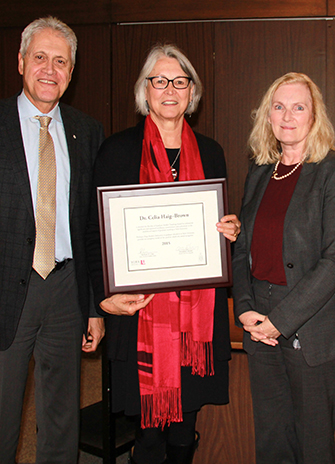 The Faculty of Graduate Studies (FGS) honoured two professors for substantial, significant and sustained excellence, commitment and enthusiasm to the multi-facted aspects of graduate teaching at York University.

“Celia’s extraordinary work in the classroom, on supervisory committees, as a mentor to students present and past, and finally as a guiding force in the many programs with which she is affiliated, all mark her an exemplary member of the graduate community at York,” said Lenton.

Lenton commented that Haig-Brown’s stellar record of teaching, mentorship and commitment to graduate education has influenced multiple cohorts of scholars and teachers, as reflected by one of her nominators who said “her teaching has transformed the way we engage with social justice as a lived path”.

“It is my sincere pleasure to congratulate Celia on this award in recognition of her profound commitment to students and to graduate education at York University,” said Lenton.

Besides Education, Dr. Haig–Brown is affiliated with the graduate programs in Environmental Studies, Gender, Feminist and Women’s Studies, Humanities, Interdisciplinary Studies, and Social and Political Thought. She has supervised the completion of 11 doctoral dissertations and more than 30 master’s theses, and has sat on more than 30 PhD and more than 70 master’s supervision committees during her academic career.

Letters of support for Haig-Brown’s nomination of the award, many from former students, noted her wide influence on their pedagogical approaches, her quality of critical attention, and her powerful intellect and knowledge.

Upon accepting the award, Haig-Brown thanked all of her students, saying, “Our time together is one of the sweetest an academic can experience. Ultimately this award is representative of the incredible work by my students.”

“Professor Nick Cercone has displayed substantial and significant excellence, commitment and enthusiasm to teaching at the graduate level for more than 40 years and has made a significant impact on our graduate program and the research intensification of our department,” said the nomination.

Cercone passed away last December, at 68 years of age, as a result of illness.

In supporting Cercone’s nomination, Lassonde School of Engineering Dean Janusz Kozinski said, “Since joining York in 2006, Nick has not only excelled in obtaining major research grants but has been an excellent mentor to students. These accomplishments are further complimented by his outstanding record of undergraduate and graduate teaching where he has made a significant impact in advancing the understanding of data mining and machine learning.”

Shoukri said it was with a bittersweet mixture of pride and sadness that he was there to present the award to Cercone’s partner, Thanya.

“It is his devotion to graduate students that is remembered most fondly and with deep appreciation by the many students Nick supported – and over his career, Nick supervised to completion over 30 PhD students, and many, many other master’s students and postdoctoral fellows,” said Shoukri.

He noted, over the course of Cercone’s teaching career, his former students have gone on to tremendous success: they include a Tier 1 Canada Research Chair, two University Research Professors, a Chairperson of a Linguistics Department, two associate deans, a Presidential Young Investigator, three industry directors of research, and an NSERC Accelerator awardee. Two of his former students founded companies, and 21 became university professors.

“I can’t think of a better record,” he said. “On behalf of all of us at York, we are honoured to confer this award to Thanya Cercone in recognition of her partner Nick’s deep commitment to his graduate students at York University and to a career devoted to the extension of knowledge.”

The FGS Teaching Award is bestowed annually on a member of the Faculty of Graduate Studies who has displayed substantial, significant and sustained excellence, commitment and enthusiasm to the multifaceted aspects of teaching at the graduate level at York.