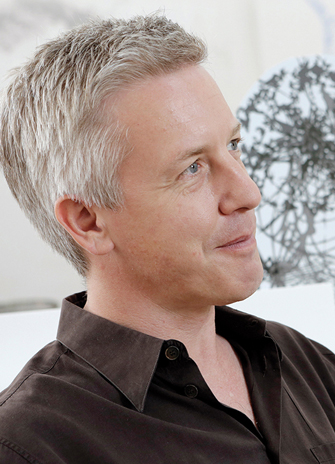 TIME Magazine hailed him as one of 100 Innovators for the New Millennium in 2001, for exploring “the unthinkable or the not-yet-thought.”

Integrating paintings, texts, wall drawings, light boxes, performance, sculptures and projections, Ritchie’s installations are investigations of the idea of information, explored through science, architecture, history and the dynamics of culture.

As the featured speaker for the 2016 Wendy Michener Lecture, the New York City-based artist presents “The Temptation of the Diagram”, a free public talk about his ideas and work, on Thursday, March 10 at 11am in the Tribute Communities Recital Hall, Accolade East Building at York’s Keele campus.

“Matthew Ritchie is a mischievous polymath whose art consists of amassing an audacious catalogue of systems of thought – everything from quantum mechanics and string theory to literature, mythology and the occult,” said Kenneth Rogers, associate dean, research in the School of the Arts, Media, Performance & Design.“He then proceeds to smash them together, as if in the Hadron Collider, to see how they might splinter and corkscrew into unruly hybrid paintings, wall drawings and multi-dimensional sculptures, and conceptual art.

“This lecture is a unique opportunity to hear this artist talk about his fascinating journey through diverse narratives of human consciousness, confronting its limits before the vast nature of the physical universe.”

In his talk, Ritchie will look at how diverse disciplines such as philosophy, physics, theology, music, garden design, art and architecture can all be connected through readings of the secret history of diagrams.

He will discuss major projects such as his installation Remanence at Boston’s Institute of Contemporary Art; his exhibition Proposition Player at MASS MoCA; The Long Count/The Long Game, a multimedia collaboration featuring composers and performers Aaron and Bryce Dessner of the Grammy Award-nominated indie rock band The National, Kelley Deal of the alt rock band The Breeders, Shara Worden/My Brightest Diamond, and MIT composer Evan Ziporyn, that premiered at the Brooklyn Academy of Music; The Morning Line, an interactive modular musical ‘anti-pavilion’ created in collaboration with architects, physicists, engineers and more than 40 composers that continues to tour internationally; and the projective opera Hypermusic, an ongoing collaboration with composer Hector Parra and physicist Lisa Randall.

Ritchie will conclude his lecture with a call for volunteers from the audience to take part in an innovative form of live participatory tarot reading.

Rogers will moderate a Q&A with the artist following his presentation.

Admission is free, and all are welcome.

Matthew Ritchie’s work has been presented worldwide, including at the Whitney Biennial, Venice Architecture Biennale, and the Biennials of São Paulo, Sydney, Seville and Havana; The Barbican, London/UK; Centre Pompidou, Paris; and the Guggenheim Museum, NYC. Recent solo exhibitions include Monstrance/Remonstrance at the ICA Boston and Ten Possible Links at the Andrea Rosen Gallery, New York in 2015. His works are in the collections of the Museum of Modern Art, Guggenheim Museum, Whitney Museum of American Art, Albright-Knox Museum, San Francisco Museum of Modern Art and other institutions worldwide, including a permanent large-scale installation at MIT. He has written for Artforum, Flash Art, Art & Text and the Contemporary Arts Journal, and is a contributor to Edge. He was featured in an hour-long segment on the PBS series Art:21, focusing on groundbreaking artists in the 21st century.

The Wendy Michener Lecture is named in honour of Canadian arts critic, producer and journalist Wendy Roland Michener (1935-1969). Established at York University in 1986, the lecture provides a forum for discussion of pivotal issues and developments in culture and the arts.