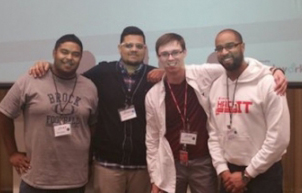 Above: The Stranger Danger team

Lassonde School of Engineering student Mohit Gummaraj Kishore was part of a hackathon team that placed second in Scotiabank Hack IT during the weekend of Feb. 6 and 7.

The Scotiabank Hack IT: Debt Challenge engaged more than 100 coders and digital artists to build solutions in teams that would help Canadians manage debt better.

The hackathon lasted 40 hours, at the end of which time 24 solutions for better debt management were presented to peers, mentors and a panel of committee judges.

The committee of judges included members of Scotiabank’s senior management team and external experts such as Barry Choi from Money We Have, Jessica Moorhouse from Money Life Balance and Vuk Magdelinic, a FinTech Entrepreneur. The committee judges reviewed each submission and narrowed them down to three final teams.

“I love to take part in hackathons and other networking events, and I also enjoy working with Terry Sachlos as an in-house programmer for BEST,” said Kishore.

Kishore’s team, Stranger Danger, placed second and received a prize of $5,000 dollars. Kishore is a third-year computer science student at Lassonde. Two Brock University students are also part of the team. The fourth member is an employee of the Canadian Automobile Association.