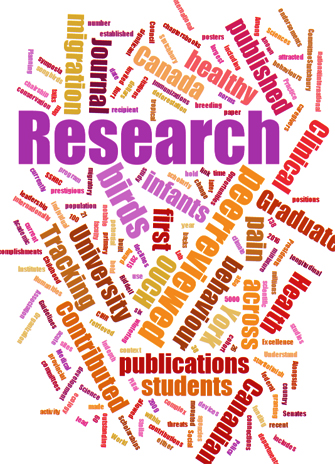 Two York researchers have been named recipients of the 2016 President’s Research Excellence Awards. Distinguished Research Professor Bridget Stutchbury, Faculty of Science, has been selected as the recipient of the President’s Research Excellence Award. Professor Rebecca Pillai Riddell, Faculty of Health, and York Research Chair in Pain and Mental Health, has been named recipient of the President’s Emerging Research Leadership Award. The awards will be presented at the annual York U Research Leaders recognition event on Feb. 24.

“The President’s Research Awards recognize the outstanding scholarly contributions that researchers make to their fields,” said York University President and Vice-Chancellor Mamdouh Shoukri. “Not only are Professors Stutchbury and Pillai Riddell exceptional research leaders at York, but their research is making an impact at national and international levels.”

As the recipient of the 2016 President’s Research Excellence Award, Stutchbury has made significant contributions to outstanding research on the ecology, behaviour and conservation of birds. She studies the migratory behaviour of birds through the use of miniature tracking devices that are mounted on the backs of birds and then retrieved a year later after migration. Tracking the start-to-finish migration of individual songbirds for the first time has allowed her to map the complex connections between breeding and wintering sites and to link population declines to climate change, tropical deforestation and potential other threats. She has contributed to over 100 peer-reviewed scholarly publications with more than 5000 citations, including her most notable research paper published in 2009 in the prestigious scientific journal, Science.

Her scientific and scholarly accomplishments have been acknowledged by a Canada Research Chair Tier 2 in Ecology and Conservation Biology (2002 to 2012). In 2007, her book Silence of the Songbirds, was nominated for a Governor General’s Award in non-fiction and inspired the 2015 award-winning documentary The Messenger.

“I’m very proud that my research has been selected to showcase York University’s diverse research culture. My colleagues provide an incredibly supportive and exciting environment in which to take chances and be innovative,” said Stutchbury.

As the recipient of the President’s Emerging Research Leadership Award, Pillai Riddell has established the first norms for the development of acute pain behaviours in healthy infants, within the context of primary caregivers through her (the Opportunities to Understand Childhood Hurt [OUCH] Lab at York. Internationally, the OUCH cohort is known to be the largest and most in-depth longitudinal study on healthy infants in pain to date.

Her program of research has been built on millions of dollars on funding from federal and provincial granting agencies. She has contributed to more than 60 peer-reviewed publications, 21 chapters/books, 26 invited talks, 38 peer-reviewed national/international symposia and 138 posters. Her research has attracted stellar graduate students from across the country and all six of her students currently hold Canada Graduate Scholarships from either the Canadian Institutes of Health Research (CIHR) or the Social Sciences and Humanities Research Council of Canada (SSHRC). Among her international accomplishments, she was a clinical research lead on the 2015 Clinical Practice Guidelines for Immunizations published by the Canadian Medical Association Journal with recent endorsements by the World Health Organization. Alongside this research activity, she has also held a number of leadership positions across departmental, faculty, and university committees. This includes her current chairship of York University Senate’s Academic Policy, Planning, and Research Committee.

“I am extremely grateful to have been enabled to grow my program of research in such a nurturing environment. I look forward to continuing to support York’s research intensification efforts both at home and abroad, ”said Pillai Riddell.

The York University President’s Research Excellence Award recognizes senior established, full-time, active faculty members at the rank of professor, with distinguished scholarly achievements who have had a notable impact on their field(s) and made a substantial contribution to advancing the University’s international reputation for research excellence while significantly and positively contributing to one or more aspects of the York community’s intellectual life.

The York University President’s Emerging Research Leadership Award recognizes full-time faculty members within 10 years of their first academic appointment, who have had a notable impact on their field(s) and made a substantial contribution to advancing the University’s international reputation for research excellence while significantly and positively contributing to one or more aspects of the York community’s intellectual life.