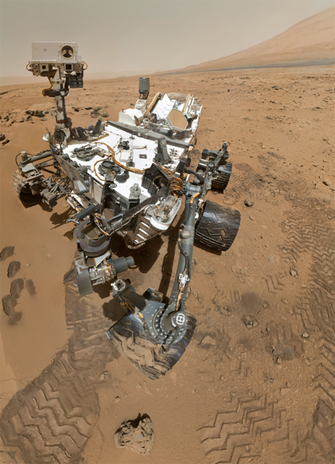 Curiosity is a car-sized robotic rover exploring Gale Crater on Mars as part of NASA’s Mars Science Laboratory mission (MSL).[3] As of February 16, 2016, Curiosity has been on Mars for 1255 sols (1289 total days) since landing on August 6, 2012. Image: NASA

Lassonde Professor John Moores and his research team have been selected by NASA to provide scientific and operations support to the Mars Science Laboratory Mission (Curiosity).

The Lassonde team will be part of the mission through 2020 as they help plan out what the $2.5 billion Rover will do each day.

“We’ve been amazed by everything the rover has sent back, but the whole of our team here at Lassonde is looking forward to where Curiosity takes us over the next four years. Who knows what discoveries are still out there over the next ridge line, just waiting to be made,” said Moores.

A total of 28 proposals were selected out of nearly 100 submitted proposals from researchers around the world.

“It’s amazing to be a part of the MSL team and to see your work realized on such a large project. I can’t describe the feeling of hearing that your contributions are ‘Go’ to run on Mars!” said Smith.In addition to their work with Spacecraft Operations where they represent environmental science in many of the daily planning sessions, the team also makes videos of the movement of clouds and looks at the motion of dust within the Gale crater.The research team has put out five papers on this topic recently, two of which were helmed by the graduate students.