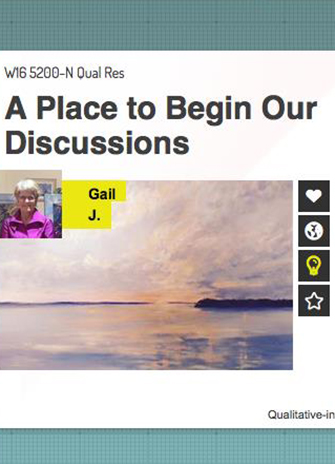 If pedagogy is a living, organic entity, what would that entity look like?

Gail Mitchell, nursing professor in York U’s Faculty of Health, has an idea.

It’s an evolving exploration of teaching and learning, an environment that nurtures intelligence and empowers discovery. It’s the foundation of education delivered through innovation and technology.

Here at York, she calls it Daagu.

Mitchell is one of five York faculty behind the brainchild that is Daagu – an eLearning platform that offers holistic and collaborative eLearning opportunities to students.

It was conceived to deliver an enriched experience that fosters narrative, conceptual learning, and reflection, but also to complement other eLearning tools such as Moodle.

Daagu is unique in that it is a non-linear virtual space where students contribute to the curriculum and network their learning over the term/course of study.

The model is creating a shift in approaches to virtual teaching and learning.

The team first met to explore a way to enrich the eLearning experience for both faculty and students. Once a blueprint was drafted – to develop an “innovative trans-disciplinary, web-based, suite of pedagogical tools for curriculum development” – the team applied for academic innovation funding (AIF).

It received funding for three consecutive years, and the early stages of Daagu were set into motion about five years ago.

Mitchell, however, has been teaching exclusively online at York U in the nursing program since 2005; the master’s program in nursing was created to be entirely online/blended.

In navigating the current online platform, Moodle, Mitchell realized that it was a very linear, teacher-driven process remnant of pedagogical systems stemming from the ’50s and ’60s – the practice of manufacturing education by chunking and delivering content.

“The teacher loads modules of content, and the student goes in and consumes it,” says Mitchell of Moodle and similar platforms. “It doesn’t work to bring people together to share differences and experiences.”

The name itself is borrowed from the practice of ‘dagu’ by the Afari tribe in Ethiopia, a word when translated means “information.” But the ritual of dagu is steeped in a shared responsibility to exchange ideas, testimonies and experiences on politics, health, community resources and everything in between.

For the Afari people, dagu is a responsibility that is engrained in their culture; it’s a way to identify patterns, problem-solve and make observations to better understand how to plan for the future.

“It’s a collective, a community,” says Mitchell. “It initiates dialogue.”

With respect to eLearning, this approach is an unusual practice because, as Mitchell says, students tend to look for the “right way” to fulfill course requirements.

Instead, Daagu presents and promotes student choice and engagement, community dialogue and meaningful application of conceptual content. It’s very much a self-directed way of learning.

“Students can share emotions (about the material) or indicate shifts in understanding,” says Mitchell. “They connect ideas in new ways – in ways that a teacher could never do – and they cross-collaborate and discuss between and among other students.

“They start to share additional resources, and what happens is they begin to contribute to the curriculum.”

Think of it as social media-meets-discussion forum. Daagu is media-rich and continually evolving with the addition of discussions, feelings, resources and experiences with the potential to expand in new directions at a given moment.

Elizabeth Cote is one of the several hundred students to have used Daagu at York U. The third-year nursing student describes it as an engaging learning experience.

“It allows us (students) to have more freedom,” she says, adding that she’s participated in two Daagu courses – the first one women’s health, and this semester nursing and the environment. “It tailors to what you are interested in, and it presents it all right there with visual displays of discussions, opinions and resources.”

For students, she says, what you put in to it is what you are going to get back.

For teachers, it presents a new role to teach through questioning ideas, perturbing assumptions and facilitating new and diverse understandings, says Mitchell.

“Generally, once students figure out nobody is telling them what they have to know, they like it,” she says.

This is the second full year for Daagu; the roll-out was early in the fall of 2014 and at that time the team was awarded funding to develop an updated look and interface.

Mitchell says roughly a dozen faculty members are using it – whether fully, or as a blended approach to their course curriculum.

The team continues to work on adding new features and functionality to Daagu, and next in line is a global network component which will allow Daagu users to share information and knowledge across disciplines. An example, she offers, would be a space dedicated to social justice where students from different areas of study could contribute and engage with different ideas and resources.

The hope is to have that running later this year.

Daagu is picking up momentum, and in April, the University’s Teaching Commons will start hosting workshops for instructors. Mitchell says there has also been outside interest and some possibility to develop the platform beyond York U in the future. The team is working closely with Innovation York to address issues of intellectual property protection, sustainability, and business development.

“It’s a very powerful platform,” she says. “It’s deep and authentic engagement, and it seems like such a natural way to learn.”