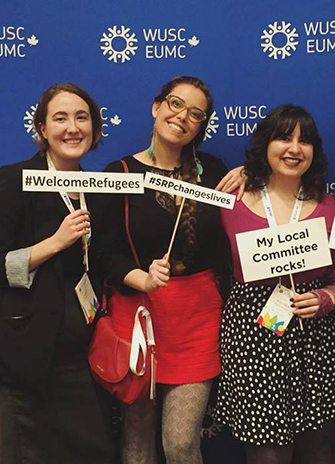 Reem Alhaj is a second-year student at York University pursing a double major in psychology and political science.

She’s a vibrant, outspoken 27 year old who’s path to higher learning has been less than traditional, but more than meaningful.

Rewind seven years, and Alhaj was living in her homeland of Syria, working and exceling in an administrative role with an international corporation. It was a secure job with opportunities – but she knew she wanted more, and resolved to pursue an education in Canada.

“I realized that this job would not let me reach what I was aiming for,” she said, adding she had lost faith in the education system in Syria and quit school at age 14.

Alhaj began to save her earnings to fund her dream – a dream, she recalls, that most people dismissed as unattainable, despite her determination.

A few years later, however, the political climate in Syria became perilous and Alhaj was forced to flee her country and seek refuge in Lebanon. It was then, after leaving her home and her job, she began to cast her own doubts on the possibility of studying abroad.

“I almost started to think it was not going to happen,” she said.

Her doubts continued to weigh down her optimism, even after discovering the World University Service of Canada (WUSC) Student Refugee Program (SRP) – an initiative that works to resettle refugees in Canada and facilitate opportunities for refugees to attend Canadian post-secondary institutions. It’s a non-governmental, non-denominational organization with chapters all across Canada.

“I had a different case from most students (applying),” said Alhaj. “Usually they pick people who have finished high school, but since I was 14 I haven’t been in school.”

And, there was also her age; at 26, she would be a considered a mature student – surely, she thought, another strike against her.

But, in a month’s time she was interviewed and accepted into the program, and offered a spot at York University.

Alhaj was selected and sponsored by a committee of students at York University representing the on-campus student chapter of WUSC. Their job, as volunteers in the committee, is to provide support to incoming refugee students.

The committee receives funds from current York students who pay a referendum-approved levy that goes toward tuition and accommodation costs for the sponsored students. That coffer allows an opportunity for one student, each year, to study at York’s Keele campus and one student, every three years, to study at the Glendon campus.

In addition to financial assistance, WUSC’s role is also vital in the resettlement process.

“All of these refugee students are coming to campus alone,” said Don Dippo, professor in the Faculty of Education and faculty advisor for WUSC. “When a WUSC student comes, part of the difficulty for them is leaving their families.”

WUSC steps in to ease that transition – they meet the students at the airport, help them with finding winter clothing, setting up cell phones, finding accommodation, navigating campus and day-to-day activities.

“They provide what, ordinarily, friends and family would provide,” said Dippo. “It’s all about helping them get established and getting settled in both academically and socially – it’s absolutely crucial in the first years.”

Though Alhaj had little trouble adjusting to her new life, her experience as a WUSC-sponsored refugee student gave her a unique perspective. She saw some gaps in the way the local WUSC chapter was operating, and joined the committee. She currently volunteers as co-chair.

She worked with the committee to push for changes that included tuition waivers from the University for refugee students, and better communication within the committee itself.

Her work with WUSC has aligned with an important milestone for York U. In response to the global refugee crisis, the University announced increased support for refugee students. Effective 2016, the University is making available five four-year tuition waivers for WUSC-sponsored refugee students at the regular tuition rate, of which one waiver will be directed to support a student at the graduate level of study. The University has put into place five first-year waivers to assist with costs for University residence fees and meal plans.

York University has committed to expanding these programs by raising additional funds for the bursaries, so that refugee students, whether they are sponsored by WUSC or not, can receive more financial assistance. (Funds can be directed to the CRS Bursary for refugees through a new online giving portal.)

“Reem has a very good insight as to what the gaps were, and how to ramp up for sponsoring five students next year,” said Dippo.

Alhaj said she is working toward a shift in understanding among York’s WUSC committee members, with an emphasis on communication.

“When I came from the airport, there were so many people to greet me,” she said, “but the next day, there was no one.”

She attributes this oversight to a breakdown in communication, and says she is working with WUSC to develop protocols and guidelines so volunteers are always available to refugee students.

“When I ask myself why I am doing it, I know it’s for the students like me who are looking for an opportunity to come here and study,” she said.

Most WUSC volunteers, however, are not refugee students. They are students like Heather Dirckze, a fourth-year international development student who wanted the opportunity to “make a big impact on people’s lives”.

Dirckze, WUSC co-chair, joined the committee in her first year of studies at York U. Some of her responsibilities include selecting which students to sponsor, advising the sponsored student, organizing social events and “just being a friend”.

“I’ve gotten a lot of practical experience, but with WUSC and the sponsorships, I feel like I see in front of me the changes that we are making,” she said. “It’s a very unique way to get involved.”

As chair, she busy preparing for the additional students that will arrive this fall, and her hope is to grow the committee to 20 dedicated members. Current membership sits at between 12 and 15 regular members.

“We are doing things to increase our capacity to assist five people,” she said. Her plan is to create specific roles and assign two people to each of those roles.

“Going from one to five students, I think that says a lot. I think it says in a time of crisis, York has stepped up and given as much as they can,” she said.

In order to attract more volunteers, WUSC will host a seminar in partnership with York U’s Centre for Refugee Studies “WUSC: Working within refugee studies, advocacy and support” on March 2 from 12:30 to 2pm in 280N York Lanes.

Alhaj says her vision for WUSC includes collaboration between Faculties and WUSC, including academic and experiential opportunities for students in international development and other related programs.

“It’s a good way to make sure there will always be people there, ready to help,” she said.