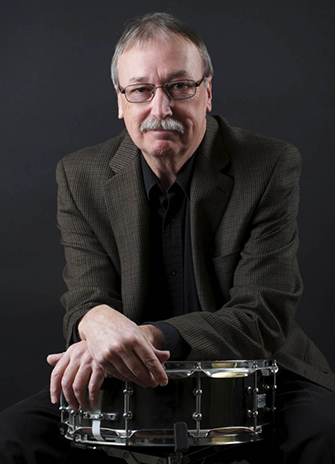 Internationally recognized performer and composer, and a professor of music at York U, Barry Elmes will lead a group of friends and colleagues in a showcase concert on campus on Feb. 4 from 7:30 to 9:30pm.

The Barry Elmes Quintet will perform recent compositions and music from all five of the group’s CDs in the Tribute Communities Recital Hall, Accolade East Building as part of the 2015-2015 Faculty Concert Series.

A celebrated jazz percussionist, composer and bandleader, Elmes is the area coordinator for jazz in the Department of Music, and is joined by Mike Murley (saxophone, and graduate of York’s jazz studies program), Reg Schwager (guitar), Kevin Turcotte (trumpet, and teacher of jazz performance at York), and Steve Wallace (bass).

Elmes has been a mainstay of the Canadian jazz scene since the early 1980s. His work has been documented on over 90 jazz CDs, and he has appeared with and/or recorded with many renowned artists including Tommy Flanagan, Hank Crawford, Diana Krall, Joe Henderson, John Abercrombie, Oliver Jones, Cedar Walton, Phil Nimmons, Dizzy Gillespie and the Moe Koffman Quintet.

The quintet has performed extensively, including a tour in Chile in 2000, and in 2012 marked its 20th anniversary with a cross-Canada tour.

Elmes has performed worldwide, and represented Canada in 1992 at the Venezuela International Jazz Festival with another group he leads – the quartet Time Warp.

Elmes is a professor of music at York University and currently serves as the Jazz Area coordinator. He served as chair of the music department from 2007 to 2010.