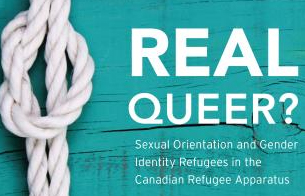 In his new book, Murray, from the Department of Anthropology in the Faculty of Liberal Arts & Professional Studies, examines the ways in which sexuality intersects with the experience of being a refugee claimant.

In the early to mid-2000s, Murray met a number of SOGI refugees through his volunteer work. It was their stories that motivated him to write this book.

“What struck me was how their narratives of coming to Canada revealed not only the huge challenges of trying to cross multiple borders, but the often equally daunting challenge of learning about and navigating the Canadian refugee application process and Canadian society,” said Murray.

His book makes these narratives accessible to audiences interested in sexuality and migration research, including university students and specialists.

“Refugees are currently a ‘hot topic’ in the media, but there is little discussion about the process of becoming a refugee, or how different national and transnational bureaucracies create, maintain and alter the category of the refugee,” he said. “Sexual Orientation and Gender Identity refugees are a relatively new category of refugee and reveal some of the ways in which ‘the refugee apparatus’ is continuously changing and adapting, creating new categories of inclusion and exclusion.”

The book highlights and analyzes assumptions and decisions made by the Canadian bureaucracy in relation to the sexual orientation and gender identity of refugee claimants. Murray’s interviews with Refugee Board Members and staff reveals how normative Western models of sexual identity influence the determination of who is a “real” SOGI refugee and who is not.

“It asks questions about the ‘universality’ of sexual orientation and gender identity categories and the challenges of translation when people from diverse socio-cultural backgrounds must render complex desires and values ‘legible’ for the state,” Murray said.

The book launch and signing, to be held on Feb. 2 from 3 to 5pm in 626 Kaneff Tower, will be accompanied by a panel discussion. In addition to Murray, panellists include anthropology Professor Wenona Giles and Professors Amar Wahab and Enakshi Dua from the School of Gender, Sexuality & Women’s Studies. All students, faculty and community members are invited to attend.

“The panel discussion provides an opportunity for specialists from a number of different backgrounds — refugee studies, sexuality and critical race studies, and migration studies — to apply their own research expertise to critically interrogate the arguments of my book,” said Murray.