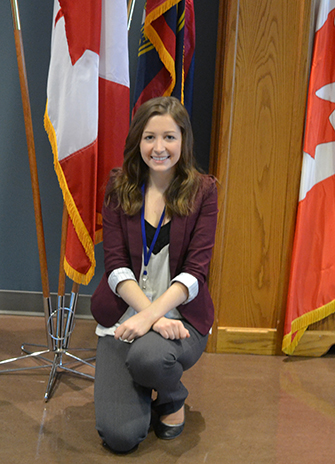 Fulbright Canada has awarded fourth-year Glendon student Tetyana Klimova with a prestigious Killam Fellowship, funding a semester-long exchange to the University of Washington, which she started earlier this month.

Born in Ukraine, the international relations and Canadian politics student in Glendon’s Political Science department will be taking her appreciation and interest in global politics to Seattle in January. By learning French in Glendon’s bilingual environment, she hopes to gain a better understanding of world politics, crediting her professors with sparking her interest in Canada-U.S. relations.

Klimova recently completed an independent study with Professor James Laxer on Canada-U.S. relations and plans to apply her learning to broaden her understanding of this bilateral relationship. Her immersion in the American university will provide her with a first-hand look at the micro- and macro-interactions between Canada and the United States and how this affects the rest of the world.

She’s currently completing a bachelor’s degree in political science with a minor in sociology and a certificate in law and social thought. Klimova hopes to use her academic research and real-world experience to pursue future studies at law school and a career in international law and social justice.

The Killam Fellowships Program is a competitive program providing an opportunity for exceptional undergraduate students from universities in Canada and the United States to spend either one semester or a full academic year as an exchange student in the United States or Canada respectively. The program provides a cash reward of US$5,000 per semester, a three-day orientation in Ottawa and a three-day spring seminar in Washington.

Fulbright Canada is sponsored by the United States Department of State and the Canadian Department of Foreign Affairs, Trade & Development. It is a binational, treaty-based, non-governmental, not-for-profit organization, governed by an independent board of directors, charged with identifying and supporting the very best and brightest in Canada and the United States.