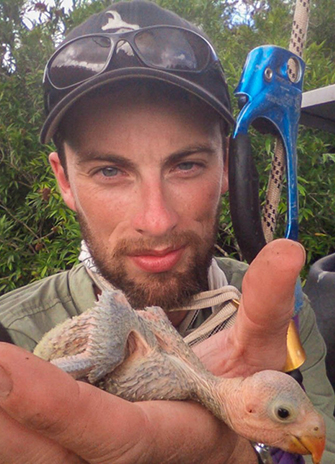 Myles Lamont, “Canada’s New Noah” for 2013, with an echo parakeet chick. The echo parakeet is an endemic Mauritian species, which Wildlife Preservation Canada helped save from extinction in the 1980s and 1990s.

The Faculty of Environmental Studies  (FES) at York University and Wildlife Preservation Canada (WPC) are partnering on a unique collaboration in the fight to save animal species at risk from extinction in Canada.

The partnership will combine academic research and teaching with experiential learning to create opportunities for students at Canada’s largest Faculty for environmental studies. It allows York U students to gain hands-on experience with WPC’s species recovery programs for at-risk birds, reptiles, amphibians and pollinators, such as the rusty-patched bumblebee, the eastern loggerhead shrike and the Ord’s kangaroo rat.

According to FES Professor Sheila Colla, students will help care for the at-risk species in their captive breeding locations at various sites around the province; help answer research questions about the animals; and help with NGO programming/fundraising and interacting with stakeholders.

“This partnership will allow FES students the opportunity to work on the conservation and management of some of Canada’s most at-risk species,” said Colla, adding the work will begin in the spring.

WPC Executive Director Randal Heide describes the partnership with York as “deepening our relationship” after previous, informal past partnerships with the University.

“FES offers a number of unique strengths, and we believe this collaboration will lead to improved prospects for some of Canada’s most critically endangered species,” he said.

Colla was brought on by WPC as a postdoctoral researcher in 2012 and in this role, she developed their nationwide At-risk Native Pollinator Initiative, now one of their largest programs. With the creation of this new partnership, she will continue as the lead scientific advisor for the program.

“Wildlife Preservation Canada is a unique organization in that they are using the best available science to provide hands-on care to Canadian species at the brink of extinction,” said Colla.