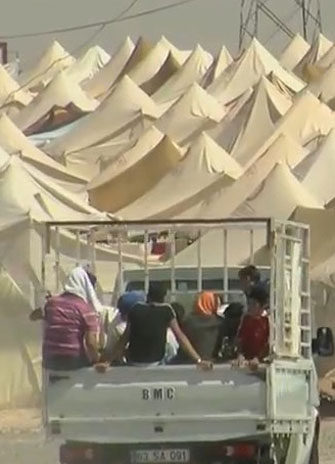 York University is officially launching its Syria Response and Refugee Initiative with a special community information session, website unveiling and reception on Monday, Jan. 18, from 12:30 to 3pm in Room 519, Kaneff Tower on the Keele campus.

At 2pm, there will be a celebration to officially launch the project, share news of current initiatives and unveil the project website for guests, sponsorship team members, researchers and anyone interested in learning more about York University’s efforts.

Organizers request that individuals planning to attend either or both events should submit their RSVP to http://goo.gl/forms/5DBmmP2kRq.

The Syria Response and Refugee Initiative, with support from Osgoode Hall Law School, is housed within, and strongly supported by York University’s Centre for Refugee Studies. The project was conceived and developed as a way of bringing together University community members, researchers and donors to help rally their efforts to support refugees and their families and to further promote knowledge of refugee and forces migration issues.

“The commitment, generosity, compassion and leadership demonstrated by so many people at York – students, faculty, staff, alumni, donors and supporters – has been and continues to be truly inspiring,” said Sossin.

As part of its overall efforts, York University is collaborating with Ryerson University, the University of Toronto and OCAD University, in the Lifeline Syria Challenge to facilitate private sponsorships, raise funds and engage volunteers in a coordinated effort to bring Syrian refugees to Canada.

As part of this response, last fall, York turned to its community to establish campus sponsorship teams, who are working to raise a minimum of $27,000 each and have committed to supporting a Syrian refugee family for their first year resettling in the Greater Toronto Area (GTA).

“It has been incredible to see the outpouring of enthusiasm to support refugees at York University. Even before we began to widely promote our programs York U community members have stepped up to sponsor Syrian and other refugees while exploring further ways to support refugees as well,” said John Carlaw, project lead for the Syria and Refugee Awareness Initiative.

To date, six York University teams have formed and are actively working to raise the necessary funds to sponsor refugee families. More teams are being actively recruited. At the launch event, community members will have an opportunity to meet some of the team members and hear more about their efforts. To support and learn more about the teams, visit the York page on the Lifeline Syria Challenge website.

Any members of the University and wider committee interested in getting involved in or keeping updated about the Lifeline Syria Challenge at York can register their interest at http://bit.ly/1W6TjrG.

The University has a long history of proactive work in refugee studies. The Centre for Refugee Studies at York University and the positive impact refugees have made to research centres, faculties and initiatives over several decades means that York is particularly well positioned to play a positive role. “Originating out of the documentation project for Operation Lifeline during the Indochinese Boat People resettlement in the 1980s, the Centre for Refugee Studies is pleased to host this project as the most recent York-based initiative to support refugees,” said Christina Clark-Kazak, director of the Centre for Refugee Studies. “We are encouraged by the depth and diversity of responses to Syrian refugees from across the University.

Information on these events can be found on the Centre for Refugee Studies refugee-related events calendar. This launch forms part of Refugee Awareness Week, a York student-led initiative that will be holding events from Jan. 18 to 21, including tabling in Vari Hall and a model refugee camp in the Upper Bear Pit during the day on Jan. 19. A volunteer information session for students interested in the Lifeline Syria Challenge at York will also be held.

The Syria Response and Refugee Initiative launch will include attendance by members of the University’s student chapters of the World University Service of Canada (WUSC).

These committees at the Glendon and Keele campuses represent one of best, long-standing and most meaningful ways for York community members to get involved in refugee support and sponsorship, said Carlaw. As of 2015-16, York University and its students have sponsored and helped 25 refugee students settle in Canada from 11 countries. Support has been ongoing since the first sponsorship in 1987/1988 out of Founders College.

As part of its response to the global refugee crisis the University has significantly expanded its commitment to refugee sponsorship through these two student-led committees. Beginning in 2016, it will increase refugee sponsorship from one or two to five new refugee students per year, providing four-year tuition waivers for each student. One of these will be for a graduate student each year. It will also waive residence fees for the first year and provide a basic meal plan for each student, while providing these students with access to work-study positions for four years.

York University community members can support bursaries for both WUSC and non-WUSC refugee students, such as the Centre for Refugee Studies Bursary for Refugee Students. To learn more, click here.