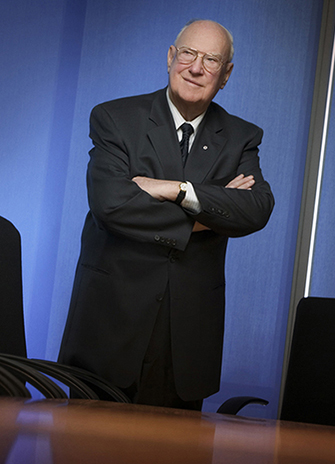 As a trailblazer, a legend and a friend – that is how James McPhail Gillies will be remembered.

Gillies, the founding dean of the Schulich School of Business, who ushered the school into the global spotlight, died on Dec. 13, 2015.

He leaves behind a legacy that reflects his passion for education and speaks to his influence in the sector. Many will remember him as a pioneer with tremendous influence in academe.

Gillies first came to York University in 1965 when he was hired by Murray Ross, the first president of York University, to build the business school, which was then known as the Faculty of Administrative Studies (FAS).

At that time, he moved on a university-sponsored study recommending the new business school offer programs to improve management in all economic sectors, including government and not-for-profit. While it was considered a somewhat radical move, Gillies was an early adopter of the philosophy that management skills can be applied to all areas of the economy. This was the foundation on which York’s business school was built.

Over the years, he made many influential decisions and pioneered many successful programs, including one of the world’s first part-time MBA programs.

Gillies was also behind the development of several specialized management programs, including the Arts & Media Administration and Canada’s first MBA/LLB degree. Additionally, he was responsible for introducing the “601” Strategy Study to the MBA, which has become a hallmark of Schulich.

“He was a visionary,” said Schulich Dean Dezsö J. Horváth during a funeral service held Jan. 2. “He had a vision of what York’s important new business school should be like, and a vision of where management education was headed. History has shown him to be right on both counts.”

Today, some 50 years later, Schulich is a top-ranked business school, both in Canada and worldwide, with more than 27,000 graduates working in over 90 countries.

“Jim’s legacy is not simply the bricks and mortar that became the Faculty of Administrative Studies some 50 years ago,” said Horváth. “Rather, it is the thousands of successful careers he launched by founding the school.”

As well as serving in the role of dean at Schulich for many years, Gillies also served as the inaugural vice-president academic affairs, as well as chair of the search committees for the inaugural deals of the Faculties of Fine Arts and Environmental Studies, and the Osgoode Hall Law School.

After his seven-year term as FAS dean concluded in 1972, Gillies ran in the federal election and served in office as the MP for Don Valley for the PC party.

He was also a prominent scholar and published two highly regarded books: Boardroom Renaissance: Power, Morality and Performance in the Modern Corporation (1992) and Inside the Boardroom (2005).

He was professor emeritus of policy, and York awarded him the title of University Professor in 1995, as well as an honorary doctorate in 2003. He was also a recipient of the Order of Canada.

Gillies was born in the small Ontario town of Teeswater in 1924. He pursued his undergraduate education in economics at the University of Western Ontario (now Western University), and later moved to the U.S. to earn an MA and PhD. Two decades later, he returned to Ontario, leaving behind a prestigious academic and administrative career at UCLA’s Graduate School of Business to come to York.

“Each day that I go to work at Schulich, I drive along James Gillies Street,” said Horváth, who remembers Gillies as a mentor and friend with an insatiable, lifelong love of learning. “And when I enter the school, I pass a bronze bust of Jim that stands in our central marketplace. These are daily reminders of a man who meant so much to us.”

Gillies was husband to Betsy and father to David, Cathy, James and Ted. He was grandfather to Jackie, Gwen, James and David.