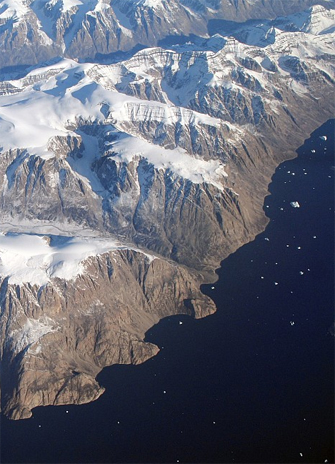 Above: An image of the coast of Greenland showing the ice sheet. Image: Wikimedia Commons

The Greenland ice sheet has traditionally been pictured as a bit of a sponge for glacier meltwater, but new research has found it is rapidly losing the ability to buffer its contribution to rising sea levels, says a York University researcher.

In 2013, Colgan spent five weeks with the team drilling firn cores in the interior of the Greenland ice sheet. Firn is multi-year compacted snow that is not as dense as glacier ice. Instead, it forms a porous near-surface layer over the ice sheet. Dropped off by a ski-equipped US Air National Guard C-130 Hercules in minus 40 degrees Celsius weather, with 6,000 kilos of supplies and equipment, the team set up several camps and drilled a series of shallow firn cores about 20 metres deep during their time on the ice sheet.

“We were interested in the thin porous near-surface firn layer, and how its physical structure is changing rapidly with climate change,” said Colgan, a professor in the Lassonde School of Engineering at York University. “The study looked at very recent climate change on the ice sheet, how the last couple of years of melt have really altered the structure of the ice sheet firn and made it behave differently to future melt.”

The researchers also towed a radar unit behind their skidoos to gather profiles between core sites along a 100-kilometre path from the low elevation ice sheet margin into the high elevation ice sheet interior. They analysed the firn cores on the spot by cutting them into small sections to quantify their properties, such as their density, so they could compare them with samples collected the following year. “The year-on-year firn changes were quite dramatic,” said Colgan.

The team was surprised by what they found. An extreme melt that occurred in 2012 caused a layer of solid ice, several metres thick, to form on top of the porous firn in the low elevation areas of the ice sheet. “In subsequent years, meltwater couldn’t penetrate vertically through the solid ice layer, and instead drained along the ice sheet surface toward the ocean,” said Colgan. “It overturned the idea that firn can behave as a nearly bottomless sponge to absorb meltwater. Instead, we found that the meltwater storage capacity of the firn could be capped off relatively quickly.”

As Machguth said, “Basically our research shows that the firn reacts fast to a changing climate. Its ability to limit mass loss of the ice sheet by retaining meltwater could be smaller than previously assumed.”

Because the models scientists use to project Greenland’s sea level rise contribution do not presently take firn cap-off into consideration, it means that Greenland’s projected sea level rise due to meltwater runoff is likely higher than previously predicted. Getting this newly observed physical process into these models is an important next step for the team.

Using unmanned aerial vehicles, Colgan also plans to begin surveying the changes in ice sheet surface reflectance caused by the development of massive ice layers associated with firn cap-off. There are preliminary indications that firn cap-off is also occurring in the ice caps of the Canadian High Arctic.