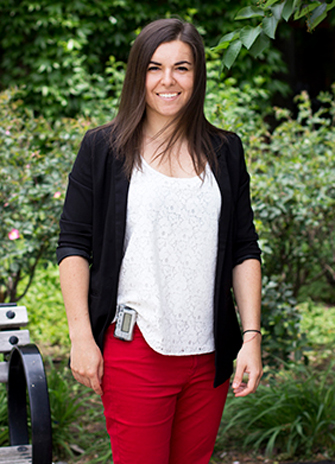 Though she didn’t realize it at the time, the year Dessi Zaharieva turned seven may have been the most significant one of her life.

Two things happened after that landmark birthday: Zaharieva, who is now 26 and working toward her PhD at York University, began learning taekwondo; and later that same year, she was diagnosed with Type 1 diabetes – an autoimmune disease that requires frequent injections or infusion of insulin as life-sustaining therapy.

While the two events may seem unrelated, Zaharieva has managed to maintain a dedicated focus on both areas of her life – excelling in martial arts and managing her diabetes. She has even found a way to link the two.

Now an expert in taekwondo, a “very traditional” form of martial arts, Zaharieva earned a bronze medal at the World Championships in 2013 when she represented Team Canada. She’s also made a name for herself as a rising star in diabetes research.

The goal of her research is to improve diabetes management and blood sugar control during exercise and activity. The outcomes of the project aim to benefit the lives of athletes with Type 1 diabetes, and also increase awareness of diabetes management during activity while reducing barriers and fears of hypoglycemia associated with exercise.

“I am working collaboratively with a team of engineers in Chicago, and we are using a computer algorithm to determine the amount of insulin and carbohydrate needed throughout the day,” she says. “Ultimately, we are trying to make it easier to control diabetes. We still have to do so much thinking (when managing blood sugar levels), and we are trying to eliminate that.”

This year, Zaharieva was recognized as an exceptional PhD student with a Vanier Canada Graduate Scholarship. The prestigious award provides doctoral students with $50,000 annually for up to three years to support their research, and also highlights its recipients and emerging leaders in their fields of study.

She completed her master’s degree at York, and during that time she conducted a study to observe what effect caffeine has on Type 1 diabetics during exercise.

“At that time, there was very limited research on this topic,” she says, adding that she determined caffeine caused modest increases in blood sugar levels during aerobic exercise in individuals with Type 1 diabetes.

“York is definitely well known when it comes to research in diabetes and exercise metabolism,” says Zaharieva.

Professor Riddell’s commitment to Type 1 diabetes research in the area of exercise was a huge factor in her decision to pursue graduate studies at York University, she adds.

She has also worked for the York University Diabetes Sports Camp – an initiative spearheaded by Riddell and founded to educate youth living with Type 1 on diabetes management during sports.

Riddell has been a champion for Zaharieva and her achievements as well. For instance, it was Riddell who nominated Zaharieva as a candidate for Bayer’s new diabetes management campaign, “Powered by Accuracy.”

Zaharieva is now featured in print and television ads for the campaign, inspiring other Type 1 diabetics to chase their dreams. She has also worked with Medtronic as a motivational speaker about living with Type 1 diabetes.

“I definitely feel inspired,” she says. “I’ve reached so many milestones and successful achievements because of my disease. I feel like I have so many people looking up to me, and that’s definitely given me more drive to be better.”

Though she keeps a very tight schedule, she says one challenge she faces right now is being her own test subject for her research; but, she admits, it does help her monitor her health more closely.

“It’s hard to be a researcher and a guinea pig at the same time, and having your head in two different places at once,” she says. But she acknowledges that it’s all part of the journey to becoming a better advocate.

Still three years away from completing her PhD, Zaharieva says when she looks forward, she sees her “ultimate dream” as having her own lab, just like Riddell, who she describes as her mentor and inspiration.

And while she doesn’t necessarily see a cure for Type 1 diabetes being readily available in the next five to 10 years, she says even if that does happen there is always more research to do.

“There are always going to be areas that need to be improved,” she says.

And if the rigorous demands of her ambitious research weren’t enough, Zaharieva recently made the transition to mixed martial arts (MMA), earning a reputation as a strong female fighter in the sport.

“After I medalled for Team Canada in 2013, I realized that I was ready for a new challenge,” she says. “I did a lot of coaching in taekwondo, but I still wanted to compete, so I started MMA.”

Having diabetes doesn’t slow her down; in fact, having to manage the disease on a daily basis, and carefully monitor it during sport, has had the opposite effect. It pushes her to continually test the boundaries in all areas of her life.