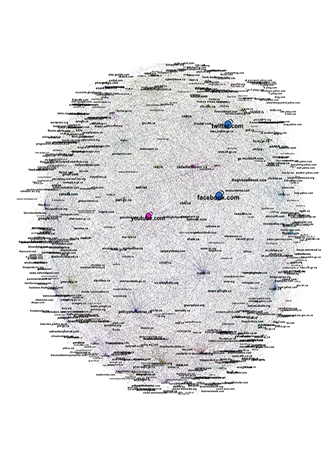 An visual example of the research the team is doing. Here, an image depicts web archived content from 50 political parties and political interest groups, from October 2005 to March 2015

The research project, which was awarded a five-year Social Sciences and Humanities Research Council (SSHRC) Insight grant, will link history and big data to give historians the tools to find and interpret digital sources from web archives.

It addresses how historians will study the 1990s and 2000s by using web archives of old websites, academic sites, discussion boards and more – all of which form a part of our cultural record.

The project, “A Longitudinal Analysis of the Canadian World Wide Web as a Historical Resource,” is headed by team of scholars based at York University (Ruest), the University of Waterloo (Ian Milligan, principal investigator) and Western University (William Turkel), and a growing team of graduate students and research associates.

Ruest oversees the development of data curation, asset management and preservation initiatives. He creates and implements systems that support the capture, description, delivery and preservation of digital objects having significant content of enduring value.

Turkel, a professor at Western University, works on integrating the project with the Mathematica programming language; the earliest fruits of this can be seen in his new open-access textbook Digital Research Methods with Mathematica.

Milligan, a York PhD graduate, leads the Web Archives for Historical Research Group at the University of Waterloo and has several federally and provincially funded digital history projects underway.

This grant supports graduate student researchers, computational infrastructure, and research dissemination. Since receiving the Insight award in June, the team has already launched the WebArchives.ca portal, which has received coverage on CBC.