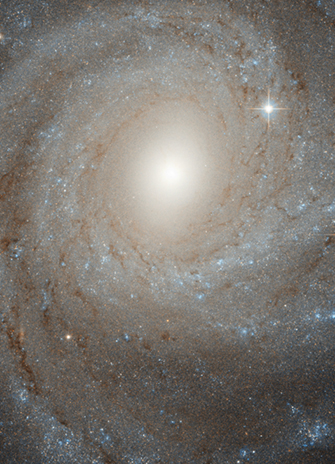 NGC 3344 is a glorious spiral galaxy around half the size of the Milky Way, which lies 25 million light-years distant. We are fortunate enough to see NGC 3344 face-on, allowing us to study its structure in detail. The galaxy features an outer ring swirling around an inner ring with a subtle bar structure in the centre. The central regions of the galaxy are predominately populated by young stars, with the galactic fringes also featuring areas of active star formation. Central bars are found in around two thirds of spiral galaxies. NGC 3344’s is clearly visible here, although it is not as dramatic as some (see for example heic1202). The high density of stars in galaxies’ central regions gives them enough gravitational influence to affect the movement of other stars in their galaxy. However, NGC 3344’s outer stars are moving in an unusual manner, although the presence of the bar cannot entirely account for this, leaving astronomers puzzled. It is possible that in its past NGC 3344 passed close by another galaxy and accreted stars from it, but more research is needed to state this with confidence. The image is a combination of exposures taken in visible and near-infrared light, using Hubble’s Advanced Camera for Surveys. The field of view is around 3.4 by 3.4 arcminutes, or around a tenth of the diameter of the full Moon. Credit: ESA/Hubble & NASA
An up-and-coming York University astrophysics researcher received an award Tuesday for furthering the understanding of the universe, including the discovery of outer-lying groupings of galaxies similar to ours and the reason why they spin.

A PhD student in physics and astronomy at York University George Conidis has identified galaxies in groupings like that of our own cosmic neighbourhood and measured how they spin. This discovery has earned him the Mitacs Award for Outstanding Innovation – PhD from Mitacs, a national, not-for-profit organization that partners companies, government, and academia to promote Canadian research and training. The award was presented Tuesday during an event in Ottawa.

Working under the supervision of York University Professor Marshall McCall, Conidis made the discovery by using pattern recognition software he designed to sift through a database of more than one million known galaxies to determine those that might “live” in a neighbourhood similar to ours. He then observed his target galaxies using a 2.1-metre telescope at an observation facility high in the Sierra de San Pedro Martir Mountains of Mexico, where he collaborated with University of Mexico Professor Michael Richer to collect valuable information that showed how the galaxies were spinning in 3D. Conidis is now combining that information with 3D computer simulations to better understand their behaviour.
“If you think of our cosmic neighbourhood as a coffee table, and the galaxies as being coffee coasters, researchers have long believed that they stand on end, but our research shows that the galaxies are actually spinning at an angle,” said Conidis, whose discovery has garnered global attention, including presentations of his work at conferences in France and Estonia.
The finding is significant because it sheds new light on the origin of galaxies, he added. “It’s an amazing discovery that gives an entirely separate story line to our own galaxy’s role in changing the way galaxies spin in the nearby cosmic web.” Conidis noted that the Milky Way and its neighbour, Andromeda, may have played a larger role than previously thought.
Conidis is representative of a new generation of researcher who is able to combine observations from a telescope with leading-edge computer technology, such as big data and pattern recognition, to solve problems that have perplexed astronomers for years. “There are some really good questions out there that have been forgotten because we simply didn’t have the necessary technology or data to properly answer them at the time they were asked,” he said. “Now that we understand more fully how to apply technology, we’re making real strides. It’s a huge paradigm shift in understanding our universe.”
The Mitacs Award for Outstanding Innovation – PhD is presented to a PhD student who has made a significant achievement in research and development innovation while participating in a Mitacs-funded program. Conidis is one of seven Mitacs award winners nationally, chosen from thousands of researchers who take part in Mitacs programs each year. The remaining six recipients were recognized for outstanding innovation, commercialization or exceptional leadership in other areas of research.
”We congratulate the award recipients as well as the thousands of additional Mitacs researchers who play a vital role in advancing our world, through the development of new products, services and technologies,” said Alejandro Adem, Mitacs CEO and scientific director. “They are true ambassadors for all that we stand for at Mitacs, including academic leadership, strong problem-solving skills and an aptitude for business.”
To learn more, read about Conidis and his discovery in the Nov. 24 issue of the Toronto Star.
More about Mitacs
Mitacs is a national, not-for-profit organization that has designed and delivered research and training programs in Canada for 15 years. Working with 60 universities, thousands of companies, and both federal and provincial governments, Mitacs builds partnerships that support industrial and social innovation in Canada.