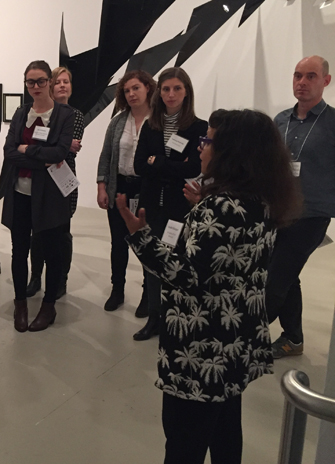 The Art Gallery of York University has been recognized for innovation in programming and exhibition design by the Ontario Association of Art Galleries (OAAG) last week in Toronto.

The AGYU received two awards from the OAAG, which were presented during the 38th annual awards ceremony on Nov. 18. The gallery received the Exhibition of the Year (thematic) for AGYU Director Philip Monk’s Is Toronto Burning? 1977/1978/1979 Three Years in the Making (and Unmaking) of the Toronto Art Community, and the Public Program Award for Heather Cassils’ research-action piece Labour Intensive, curated by AGYU Assistant Curator Suzanne Carte.

In its decision to award Is Toronto Burning, which took place fall 2014 at AGYU, the jury noted: “This was an important exhibition due to its assessment of recent, archival material….? Exhibition layout and execution was excellent, with an evident depth of research. The publication, though not available as a public edition, presents significant potential for scholarly attention. The jury applauded the work involved in putting together this material.”

The jury said it was impressed with its scope and reach and the ways in which the project was genuinely student-led, noting in its decision the following attributes: “Engagement of local community in a creative manner. Brought in interesting collaborators. Did not feel didactic. Site-specifically looking at the needs of the students. Good documentation that made it an understandable project.”

The following day, on Nov. 19 at York University, the OAAG in partnership with the AGYU and the Department of Visual Art and Art History in the School of Arts, Media, Performance & Design (AMPD), hosted a lively and polemical workshop for an eager group of some 40 art professionals from across Ontario and a group of York University curatorial students.

Titled Innovation in Exhibition Design and Installation, the workshop was the most attended in OAAG’s history. It also represented the first such workshop that students attended. The students were able to attend because of an initiative by AGYU and AMPD that saw the AGYU paid the workshop fees for four top students to attend. AMPD provided the facilities and technical support for the workshop. In doing this, AGYU and AMPD brought museum professionals from across Ontario into dialogue with York University graduate students, who represent the future of Ontario’s gallery professionals. An hour-long tour of AGYU’s current exhibition, Marlon Griffith’s Symbols of Endurance, acted as a case study for new ways of presenting performance in a gallery and also for setting new standards for accessibility in installation design.

The workshop was curated by AGYU Assistant Director/Curator Emelie Chhangur. Chhangur has won the OAAG Exhibition and Installation Design award five times over the past nine years and the OAAG Public Program Award four out of the past six years.

The AGYU is a university-affiliated, non-profit, public contemporary art gallery supported by York University, the Canada Council of the Arts, the Government of Ontario through the Ontario Arts Council, and the City of Toronto through the Toronto Arts Council.