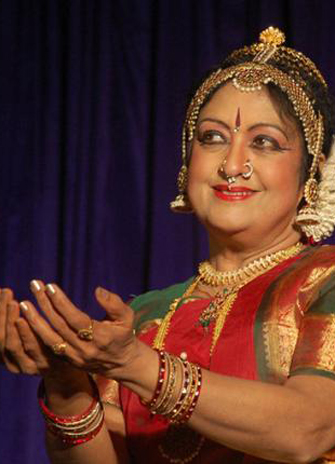 A dancer, choreographer, composer, singer, teacher, researcher, writer and Indologist, Subrahmanyam is one of India’s foremost artist-scholars. With a legendary performance career spanning six decades, she has graced stages on five continents. She is the author of 10 books and many articles and research papers on South Asian art and culture.

Subrahmanyam composes the music for most of her dance works and is a multilingual singer, performing in Sanskrit, Tamil, Hindi, Telugu, Malayalam, Bengali and Kannada, among others. In 2010 she made history by choreographing a work for 1000 dancers for the 1000th anniversary of Thanjavur Brihadeeswara Temple, part of a UNESCO World Heritage site and one of India’s largest temples and most prized architectural sites. She led the performance, which was telecast live in more than 150 countries.

Subrahmanyam’s artist residency takes place Nov. 23 to 28. During her visit, she is offering two public performances, a series of lectures and master classes for York University dance and music students, and a workshop at the Sampradaya Dance Centre, a South Asian dance academy in Mississauga founded by York graduate and adjunct professor Lata Pada.

A highlight of the residency is a public performance of Bharata Nrityam, a program of original dance works choreographed by Subrahmanyam. Joining her on stage for the performance will be two of her disciples: dancer, singer and educator Gayatri Kannan, and dancer Mahati Kannan. The evening will offer a rich overview of Bharata Nrityam, a classical dance form evolved by Subrahmanyam that revives and brings together the Marga technique of the Natya Sastra with the Desi form of South India.

Subrahmanyam will also give a free, informal midday performance featuring her music compositions on Wednesday, Nov. 25 at 12:30pm in the Martin Family Lounge, room 219 in the Accolade East Building at York.

Dedicated to education and promotion of South Asian arts on the local and world stage, Subrahmanyam is associated with a number of universities across India. She is also president of Nrithyodaya, a school and research centre for Indian arts and culture in Chennai that was founded in 1942 by her father, the well- known filmmaker and activist K. Subrahmanyam. At Nrithyodaya, where she has trained a generation of dancers, musician-accompanists and teachers, her pioneering work includes the development of a new pedagogy that integrates the practical, theoretical, emotional, intellectual and spiritual aspects of the art of dance.

Subrahmanyam’s public service contributions include the Indo-US Sub-Commission on Education and Culture, the Indian Council for Cultural Relations, and a host of other organizations in arts and academia. She currently serves on the Expert Committee for India’s Ministry of Culture and is a trustee of the Indira Gandhi National Centre for the Arts and managing trustee of the Bharata-Ilango Foundation for Asian Culture.

Her long list of honours includes Padmasri and Padma Bhushan, among the highest civilian awards of India, and Japan’s prestigious Fukuoka Asian Cultural Prize for Arts and Culture. Her performance awards include Sangeet Natak Akademi Award, the highest Indian recognition given to practicing artists; Kalaimamani and State Artiste awards from the Government of Tamil Nadu; and Kalidas Samman from the Government of Madhya Pradesh.