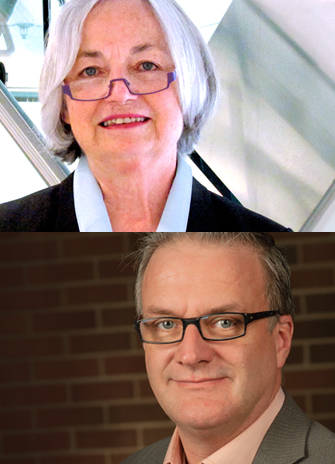 York University Professors Susan McGrath and Stephen Gaetz have been recognized for excellence in research by the Social Sciences & Humanities Research Council of Canada (SSHRC). McGrath and Gaetz are the recipients of the SSHRC’s prestigious Impact Awards. The awards were announced Nov. 16 at a special reception in Ottawa.

“These awards are fantastic recognition of the vast contribution that York researchers Stephen Gaetz and Susan McGrath have made to their innovative research programs,” said Robert Haché, vice-president research and innovation at York University. “To have two of our leading researchers receive awards from SSHRC in the same year indicates the significance of the work of York’s researchers and their commitment to scholarly excellence.”

As a professor in the School of Social Work in the Faculty of Liberal Arts & Professional Studies, Susan McGrath’s innovative work in leading the Refugee Research Network (RRN) has resulted in a successful research partnership that works to improve the well-being of refugees and forced migrants. McGrath received the Partnership Award, which is given to a partnership that, through mutual cooperation and shared intellectual leadership and resources, has demonstrated impact and influence both within and beyond the social sciences and humanities research centre.

The RRN, which was originally titled A Canadian Refugee Research Network: Globalizing Knowledge, was awarded a $2.1 million SSHRC Strategic Knowledge Clusters Grant in 2008.

It is composed of multiple networks and research clusters of experts in a variety of fields, who are charged with generating knowledge regarding refugee issues in their geographical regions. Participants include policy actors, academics from universities across the global north and south and researchers, all of whom stay in touch and share ideas through online platforms and as part of an annual meeting that takes place in Toronto in conjunction with the Conference of the International Association for the Study of Forced Migration.

As they share knowledge amongst the partners, the networks in turn exchange knowledge with refugees and forced migrants, most of whom are located in nations of the Global South. The RRN’s Facebook page has over 19,000 users, including refugees and people who may become refugees. They post and gather information such as safe travel routes and are able to provide active feedback on the RRN’s reports.

McGrath, director of York University’s Centre for Refugee Studies from 2004-12, was awarded the Order of Canada in 2014 for her contributions to refugee rights’ research and policy, as well as for nurturing scholarly collaborations.

As a professor in the Faculty of Education at York University and the director of the Canadian Observatory on Homelessness and the Homeless Hub, Stephen Gaetz has garnered international attention for his work on homelessness. He received the SSHRC Connection Award for his work to facilitate the flow and exchange of research knowledge both within and beyond the academic community. The award is given to an individual or team whose project has engaged the community on a particular subject, generating intellectual, cultural, social and/or economic impacts.

Gaetz has played a leading international role in knowledge mobilization in the area of homelessness. York University played host to 2005’s Canadian Conference on Homelessness – the first research conference of its kind in Canada. In addition, York University now hosts the Canadian Observatory on Homelessness and the Homeless Hub, the first comprehensive and cross-disciplinary web-based clearinghouse of homelessness research in the world. The focus of this network is to work with researchers across Canada to mobilize research so that it has a greater impact on homelessness policy and planning.

He was associate dean of research and professional development in the Faculty of Education. Prior to his time at York University, Gaetz worked in the community health sector, both at Shout Clinic (a health clinic for street youth in Toronto) and Queen West Community Health Centre in Toronto.