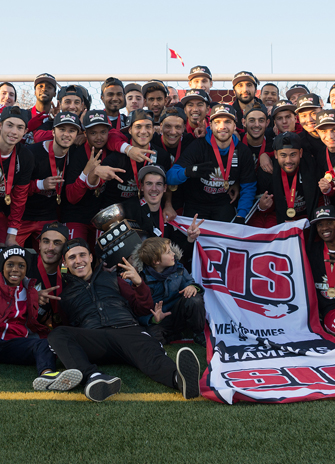 The York University Lions hoisted the Sam Davidson Memorial Trophy for the second year in a row after a 2-0 victory over the University of New Brunswick Varsity Reds in the final match of the 2015 CIS men’s soccer national championship at York Stadium in Toronto, Sunday.

The win gives the Lions their fifth CIS title in program history (also 2014, 2010, 2008 and 1977) and marks the first time they have won back-to-back championships. It is also their first banner won on home turf, and they become the first team since the Victoria Vikes in 2011 to claim the trophy in front of hometown fans.

For the Varsity Reds, the silver medal is the program’s best finish in 35 years. The last time they played in the championship final was in 1980, when they won the banner.

“The team had a lot of pressure to endure all year, being the hosts of the tournament and defending champions, but it just shows how much character and hard work was put in by these boys to make it happen,” said Head Coach Carmine Isacco, who has now won four national banners since he took the reins of the squad back in 2007.

York Stadium was electric during the start of the match as possession of the ball shifted back and forth between the two teams, who aggressively sought after a goal that would give them the lead.

In response to the stadium’s energy, Isacco said “Playing in front of our fans made this championship all the more special because, at the end of the day, we do all of this for our school. They were the extra 12th man that we needed to win the tournament.”

The Varsity Reds had the first promising opportunity of the match from a header towards goal. After getting his head to the ball off of a free kick sent in from 45 yards out, George Lawton of Bolton, United Kingdom, did well to get in front of his defender – but he put the ball on the wrong side of the post.

In the 25th minute the Varsity Reds couldn’t stop Michael Cox of Calgary from breaking the score line off of a piece of individual brilliance. Before giving his team the 1-0 lead, Cox was able to swiftly turn off of his defender in the box and slotted the ball in from a seemingly impossible angle. It was his fourth goal of the tournament and he was named championship MVP at the end of the match.

“It feels great to win a national title in my first year as a Lion,” said Cox. “We created a legacy here today that we can build off of in the years to come.”

In the second half, emotions continued to run high.

The Varsity Reds were a threat off the flanks of the field with crosses from Marcus Lees of Barrie, Ont., and Oliver Jones of London, U.K., and came close to tying up the game in the 80th minute off of a scramble in the box from a corner kick.

The Lions had a solid opportunity in the 73rd minute from a pass picked out by Jarek Whiteman of Brampton, Ont., to Cox, who was just a shoelace short of the ball.

In the later part of the half, the Varsity Reds shifted into second gear and put relentless pressure on the Lions’ back line. Lees launched several dangerous balls into the box but couldn’t find the feet of any of his teammates, and Kenneth Van Aarle of St. Andrews, N.B., nearly equalized off a chance in front of net.

As time wound down, Dena Iezady of Richmond Hill, Ont., made a brilliant turn in the box that allowed him to set up for a second goal as he passed the ball into the net and secured the Lions’ win.

York defender Daniel Gogarty of Scarborough, Ont., was named the player of the game for the winners, while Lees earned the honour for the Varsity Reds.