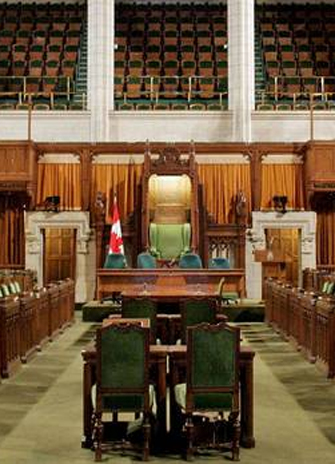 There will be a strong York presence in the House of Commons when the 42nd Parliament of Canada is called into session on Dec. 3. Seventeen individuals with connections to York University have been elected to serve in the next government of Canada – 15 Liberals and two Conservatives.

“We are delighted that York University community members will be so well-represented in Canada’s new government,” said Mamdouh Shoukri, president and vice-chancellor. “With seventeen Members of Parliament elected from two parties, and alumnus Navdeep Bains and honorary degree recipient Marc Garneau sworn in as cabinet members with portfolios of great importance to higher education, this is an exciting outcome for Canada and for York—an affirmation of the values of inclusiveness and excellence that we hold dear, and evidence that our graduates truly are citizens of the world.”

The York University alumni elected to the 42nd Parliament of Canada are:

Gary Anandasangaree (LLB ’05) was elected for his first term as the Liberal Party member representing the riding of Scarborough-Rouge Park. He is an internationally recognized human rights lawyer, community activist and advocate for education and justice. A graduate of Osgoode Hall Law School, Anandasangaree manages his own firm in Scarborough, Ont. He regularly represents Lawyer’s Rights Watch Canada at the United Nations. He has also served as an advocate for local youth, intervening in cases of wrongful student expulsion and suspension.

Omar Alghabra (MBA ’00) is a mechanical engineer by trade and an MBA graduate from the Schulich School of Business. He was elected as the Liberal Party member in the riding of Mississauga Centre in 2015. Algahabra has served in a variety of positions with General Electric Canada, Enbala Power and the Ontario Energy Board. He previously served as the Liberal Party member of Parliament for Mississauga-Erindale from 2006 to 2008, and was the liberal critic for Natural Resources, as well as Citizenship & Immigration.

Navdeep Singh Bains (BAS ’99) served as the Member of Parliament for Mississauga-Brampton South from 2004-11 and was re-elected as Liberal Party member for Mississauga-Malton. During his time in Parliament, he gained extensive experience as the parliamentary secretary to the prime minister and as the liberal critic for Public Works & Government Services, the Treasury Board, International Trade, Natural Resources, and Small Business & Tourism. On Nov. 4, he was appointed to cabinet as the minister of innovation, science and economic development.

Mike Bossio (BA ’89) is a local entrepreneur with a passion for environmental justice. Bossio was elected as the Liberal member representing Hastings-Lennox and Addington. Bossio is the chair of Concerned Citizens of Tyendinaga and Environs and as an adviser for Citizens against Melrose Quarry. He has led a successful 15-year battle with the world’s largest waste company, halting the building of a massive landfill on fractured limestone. Bossio also served as councillor for Tyendinaga Township between 1998 and 2000.

Ali Ehsassi (LLB ’99) has extensive experience working in government at both the provincial and federal levels, as well as in the private sector. He worked at the Ontario Department of Economic Development & International Trade, and later at the Department of Foreign Affairs & International Trade in Ottawa. Ehsassi was elected the Liberal Party member for the riding of Willowdale. He is a specialist in international trade and arbitration.

Rajvinder (Raj) Grewal (MBA ’10, JD ’13) was elected for his first term in federal government as Liberal Party member representing the constituents of Brampton East. Grewal has lived in Brampton, Ont., for 24 years, and currently practises law in Toronto where he specializes in corporate finance, securities, and mergers and acquisitions. He also participates in the mentorship programs at the Schulich School of Business and Osgoode Hall Law School at York University.

Ahmed Hussen (BA ’02) is a lawyer and social activist. Hussen was born and raised in Somalia and immigrated to Canada in 1993. After settling in the Regent Park neighbourhood of Toronto, he quickly gravitated towards public service. In 2002, he co-founded the Regent Park Community Council and was able to secure a $500-million revitalization project for the area. Hussen currently serves as the national president of the Canadian Somali Congress. He was elected the Liberal Party member for the riding of York South-Weston.

Majid Jowhari (MBA ’92) was elected as the Liberal Party member representing the riding of Richmond Hill, Ont. A successful businessman, he owns and is the CEO of the consulting firm Iridium Management Consulting Group Incorporated. He provides third-party advisory services to the office of CFO. He specializes in developing pragmatic solutions to complex problems, with a focus on business operation efficiency and sustainability.

Kamalpreet (Kamal) Khera (BScN ’13) was elected for her first term as the Liberal Party member representing the riding of Brampton-West. She is a York University alumna and earned a BSc in psychology and nursing. Prior to her election, Khera was a registered nurse at St. Joseph’s Health Centre in the oncology unit. She is an active member of her community.

Iqra Khalid (BA ’07) is serving her first term in Parliament as a Liberal Party member representing the riding of Mississauga-Erin Mills. She earned a BA with a double major in criminology and professional writing. During her time as a student at York University, she served as the media relations ambassador for the York University Student Alumni Association.

Joseph Peschisolido (LLB ’89) is a Liberal Party member, re-elected for a second consecutive term representing the riding of Richmond in 2011, and then elected in Steveston-Richmond East in 2015. Peschisolido is the founder of a business and immigration law firm and specializes in corporate, commercial, real estate and immigration law.

Lisa Raitt (LLB ’96) is a Conservative Party member who is serving her third consecutive term in parliament. She represents the riding of Milton, and previously held a seat for the riding of Halton. She is a graduate of Osgoode Hall Law School. Raitt specializes in the areas of intellectual property, commercial litigation and shipping arbitration.

Sven Spengemann (LLB ’98) is a Liberal Party member elected for his first term as the representative for Mississauga-Lakeshore. Spengemann is currently a BMO visiting fellow at York University’s Glendon School of Public and International Affairs, and teaches Middle East politics and professional development.

Anita Vandenbeld (MA ’95) was elected the Liberal Party member for the riding of Ottawa West-Nepean. Vandenbeld worked for the United Nations Development Program (UNDP) Democratic Governance Group in New York, where she managed a multi-partner international network to promote women’s political participation. She was also a senior parliamentary adviser with UNDP Bangladesh and with the Organization for Security and Cooperation in Europe (OSCE) Mission in Kosovo; and Country Director for the National Democratic Institute (NDI) in Congo (DRC).

“Congratulations to all of our esteemed York alumni who have been elected to serve Canada as Members of Parliament,” said Jeff O’Hagan, vice-president advancement. “We are very proud of these leaders who are dedicating themselves to civic duty. We look forward to their impact in the future and are pleased to count them among our community of nearly 300,000 alumni living and working around the world.”

In addition to the York alumni elected to the Parliament of Canada, one honorary degree recipient and an adjunct faculty member will also be going to Ottawa. They are:

Marc Garneau (DSc. [Hons.] ’02) was re-elected for a second term in federal politics. He is a Liberal Party member representing Notre-Dame-de-Grace-Westmount, and previously served the riding of Westmount-Ville Marie. On Nov. 3, he was appointed to Cabinet as the Minister of Transport. In 2002, Garneau received an honorary doctor of science degree from the Lassonde School of Engineering at York University. He made history as the first Canadian astronaut to fly in space as a payload specialist in 1984.

Marco Mendicino won a seat as a Liberal Party member representing the riding of Eglinton-Lawrence. It is his first term as a Member of Parliament. Mendicino is an adjunct professor at York University’s Osgoode Hall Law School. He previously worked as a federal prosecutor and now runs his own law practice that focuses on regulatory, and labour and employment issues.