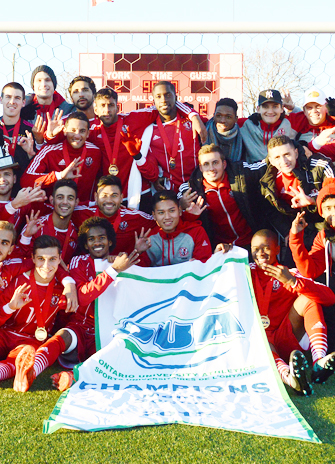 The York University Lions men’s soccer team won its third straight Ontario University Athletics (OUA) banner with a 2-1 victory over the McMaster Marauders in the championship final on Sunday, Nov. 8 at York Stadium.

The Lions become just the third team to three-peat as conference champions since 1965, and the first to accomplish the feat since Western University won four in a row from 1996-99.

For the second consecutive year, they knocked off their OUA West Division rivals in the McMaster University Marauders, who were forced to settle for the silver medal once again after winning back-to-back titles of their own in 2011-12. The University of Toronto Varsity Blues claimed the bronze medal earlier in the day with a 3-0 victory over the Ryerson University Rams.

Fourth-year striker Michael Cox was the hero for the second day in a row, scoring the winner in the 89th minute to complete the comeback after the Lions went down by a goal in the first half. Joey Cicchillo brought the ball up the left wing and fired a cross into the box that Cox headed into the net for a no-doubt goal that gave the Lions the championship.

It was the Marauders who controlled possession early, but the Lions got the first good chance of the game in the 15th minute on a shot by Cicchillo that was saved by Angelo Cavalluzzo.

In the 33rd minute, McMaster opened the scoring with a goal by Stefan Scholtz that gave the Marauders a 1-0 lead they would carry into the half.

The Lions leveled the game in the 55th minute on a beautiful strike from Jarek Whiteman from the corner of the 18-yard box that sailed past a diving Cavalluzzo.

After Cox’s goal the Marauders earned a free kick from 35 yards out and Cavalluzzo came up to take the kick. He hit a chip shot into the box that York goalkeeper Colm Vance jumped up to catch and in the process was bumped hard in the air by Ross Genovese, which earned him a yellow card. But Vance held on to the ball and moments later the final whistle sounded.

In the bronze medal match, the Varsity Blues scored twice in the first half and added another early in the second to win the medal and secure the final OUA spot at next week’s CIS championships. Dakar Charles found the back of the net in the 13th minute, Nirun Sivananthan stretched the Blues’ lead to two in the 36th minute and Antonio Ajhert put the game out of reach in the 53rd minute to round out the scoring.

The Lions, Marauders and Varsity Blues will be back at York Stadium for the national tournament, which begins on Thursday. The Lions will be looking to defend the title they won in Charlottetown last year.