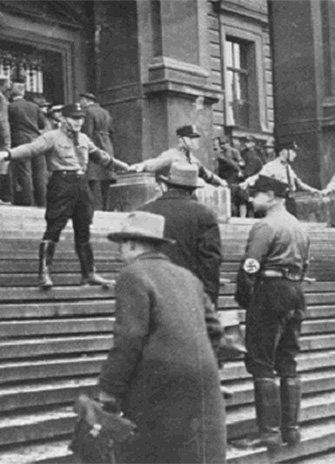 The highly acclaimed international exhibition “Lawyers without Rights: Jewish Lawyers in Germany under the Third Reich” will be on view in York University’s Osgoode Hall Law School Library from Monday, Nov. 9, through Sunday, Nov. 22. The hours are Monday to Thursday, from 8am to 10pm; Friday, from 8am to 5pm; and Saturday and Sunday, from 10am to 6pm.

The exhibition is sponsored by the Jack & Mae Nathanson Centre on Transnational Human Rights, Crime & Security at Osgoode Hall Law School in conjunction with the American Bar Association and the German Federal Bar. The exhibition has been shown in nearly 100 cities in Germany, the United States and others parts of the world.

“As important as it is to our everyday lives as a bulwark against arbitrary governance, the rule of law can never be taken for granted,” said Associate Professor and Nathanson Director François Tanguay-Renaud. “This exhibition – focusing on an insufficiently known aspect of the Third Reich – constitutes a vibrant historical testament to the importance of lawyers in holding governments to account, and the grave threats to social organization that inevitably follow when their role is undermined.

“Given Osgoode’s core mission to educate tomorrow’s lawyers and, through bodies like the Nathanson Centre, generate cutting-edge research about their responsibilities and predicaments at home and abroad, ‘Lawyers without Rights’ serves as a forceful, eye-opening reminder of what we stand for, and stand against,” said Tanguay-Renaud.

The idea for the exhibition was conceived in 1998 when an Israeli lawyer asked the regional bar of Berlin for a list of Jewish lawyers whose licences had been revoked by the Nazi regime.

“The regional bar decided not only to research a list of names but also to try to find out more about the fates behind all those names,” said Axel Filges, past president of the German Federal Bar. “Some were able to leave the country after the Nazis came into power, but very many of them were incarcerated or murdered. The non-Jewish German lawyers of those days remained silent. They failed miserably, and so did the lawyers’ organizations. We do not know why.”

After the Berlin bar transformed its research into an exhibition, other regional bars began asking whether they could show it and add their own research. “So, like a puzzle, a portrait of the fate of Jewish lawyers in Germany has emerged step by step,” Filges said.

The exhibition is currently touring North America. After Osgoode, the exhibition goes to the Buffalo & Erie County Public Library for three weeks. In addition, the exhibition has been translated into Hebrew and it opens on Nov. 29 in Jerusalem at the Israeli Supreme Court.