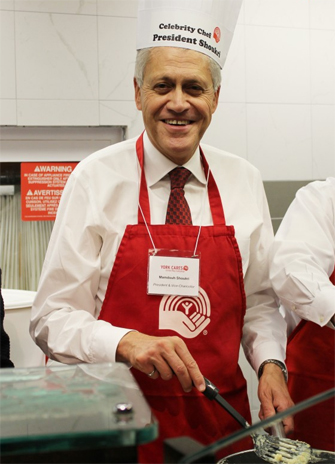 York University will launch its 2015 York Cares United Way Campaign at the President’s Pancake Breakfast Tuesday, Nov. 3, from 8 to 10am in the Central Square Cafeteria.

This year’s goal is to raise $220,000 in support of the important community services provided by the United Way. Each year, York University faculty, staff and students come together for this important cause. Last year’s York Cares United Way Campaign raised $218,900 to support social services across the city.

Funds raised through the campaign benefit important local agencies and programs, some of which impact York’s programs and students directly.

The campaign goal of increased participation – which translates directly to an increase in dollars raised – looks to members of the community to make a pledge online (or with a paper pledge form if preferred). Pledges can be paid all at once or throughout the year using the payroll deduction feature. A gift using payroll deduction is additionally efficient with the charitable receipt being included on the donor’s T4 slip.

In addition to the Campaign Kick-off President’s Pancake Breakfast, there are many other special events to support the campaign that will take place across campus through the month of November. These include:

York U faculty, staff and students are encouraged to get engaged in the campaign by joining in at one of the events being held on campus, by volunteering as a campaign ambassador or by organizing a special event of their own. Contact the campaign organizers for more details at yucares@yorku.ca.

Come out in support of York Cares 2015 and help to spread the word.

To learn more about how to get involved in the 2015 York Cares United Way Campaign, visit the York Cares website.