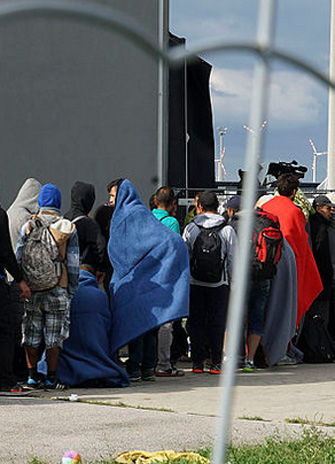 The recent agonizing images of Syrian refugees fleeing the violent civil war have been galvanizing for Canadians. The York University community has been deeply affected by the global refugee crisis and is coming together to assist students fleeing conflict in search of new beginnings.

On Sept. 20, four Toronto area universities announced they were joining forces to partner with the Lifeline Syria Challenge to facilitate private sponsorships, raise funds and engage volunteers in a coordinated effort to assist Syrian refugees.

Since then, teams from York University, Ryerson University, the University of Toronto and OCAD University have been working to establish the administrative system required to raise and manage the necessary funds ($27,000) to support a Syrian refugee family for up to one year once they have arrived in Canada. Three York teams are already in place, with more mobilizing. Two project coordinators are being deployed to provide logistical assistance to current and future Syrian refugee support teams, which will include students from York U and Ryerson.

Ryerson has created a website for all of the universities involved in the initiative, to provide individuals interested in supporting the teams with a front door to information about efforts that are under way. The website will serve as a portal for donations, and Ryerson will issue the charitable tax receipts for donations. To learn more, visit ryerson.ca/lifelinesyria.

“We want to fully engage with and encourage the support of the entire York University community – students, faculty, staff, alumni and donors – in this very important initiative,” said York University President and Vice-Chancellor Mamdouh Shoukri. “While this global crisis requires a global response, we strongly believe that, together with our university partners in the GTA, there is much we can do as a local community to coordinate and augment our efforts.”

York University is taking a coordinated, multifaceted approach to respond to the refugee crisis, consisting of formal supports for volunteer teams, new experiential learning opportunities, and an enhanced tuition and bursary program for refugee students.

York’s student chapter of the World University Service of Canada (WUSC) receives support from current York students who pay a referendum-approved levy that supports tuition and accommodation costs for refugee students. The fund provides an opportunity for one student each year to study at York’s Keele campus and one student every three years to study at the Glendon campus.

CRS coordinates a number of research and educational projects in relation to the global refugee crisis. Most recently, the centre’s Borderless Higher Education for Refugees program celebrated its first cohort of graduates. Fifty-nine students in the Dadaab refugee camps in Kenya received a York University Certificate of Completion in Educational Studies on Thursday, Oct. 15 – the first graduates of the unique program designed to take postsecondary education to where refugees live. In addition to educational and research opportunities in refugee studies, CRS offers one bursary for a refugee student.

York is enhancing its institutional commitment and, effective in 2016, the University is making available five four-year tuition waivers for WUSC-sponsored refugee students at the regular tuition rate, of which one waiver will be directed to support a student at the graduate level of study. The University has put into place five first-year waivers to assist with costs for residence fees and meal plans.

York has committed to expanding these programs by raising additional funds for the bursaries so that refugee students, whether they are sponsored by WUSC or not, can receive more financial assistance. Funds can be directed to the CRS bursary for refugees through a new online giving portal.

Students at York are also getting involved by gathering donations of clothing for refugees. The Office of Student Community & Leadership Development, in partnership with student leaders, will be coordinating a clothing drive to ensure these newcomers to York’s campuses have apparel that is appropriate for the Canadian climate.

Osgoode Hall Law School at York University is joining the University of Ottawa’s Refugee Support Program to match law students with immigration and refugee lawyers in an experiential education initiative that will see the students provide pro-bono assistance to asylum seekers.

Osgoode Hall Law School Dean Lorne Sossin, special adviser to the president on community engagement, is at the heart of the refugee initiative. “With its deep roots in social justice, as a community, the University has a special and distinct role to play in responding to this and other global refugee crises,” said Sossin. He encourages University community members interested in creating a Syrian refugee support team, or those who need to connect with the incoming project coordinators, to contact him by email at lawdean@osgoode.yorku.ca.

Through these and other initiatives, York University students, faculty, staff, alumni and donors are rallying their efforts to support refugees and their families, pursue social justice and advance the University’s mission through proactive, positive community engagement.