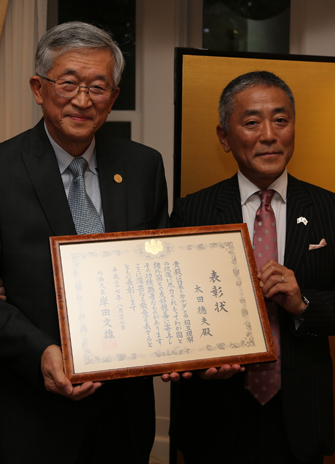 Ota (left) receives the award from

Professor Norio Ota, coordinator of the Japanese Studies Program, Department of Languages, Literatures and Linguistics, has been awarded a commendation from Japan’s Minister for Foreign Affairs. The Foreign Minister’s Commendations are given to individuals and groups with outstanding achievement in international fields, in order to acknowledge their contributions in promoting goodwill between Japan and other countries.

Ota was awarded this esteemed recognition for his long-term achievement in activities related to teaching and learning of the Japanese language, as well as for promoting broader understanding of Japan and its culture abroad.

After establishing a career as a Japanese language instructor in Japan, Vietnam, the USA, and Australia, Ota joined York University in 1984. Based on the communicative approach, he has revamped traditional curricula, teaching methods, and instructional materials to better transform Japanese language education at the university level.

Taking advantage of technology enhanced learning (TEL), Ota has been spearheading development of online courses, interactive self-study materials, and courses via video-conferencing. He has also been promoting internationalization of post-secondary education through developing and supporting exchange programs between York and its six partner universities in Japan. Adding to a long list of achievements in his career, Ota has established the first honours minor degree program in Japanese Studies in Canada, and the program commenced in the fall of 2014.

York’s Japanese Studies Program, which had a total of only 150 students at the time when Ota started, currently has more than 500 students and continues to be a popular program in the department.

To celebrate the commendation, a special ceremony was held at the official residence of the Consul-General of Japan in Toronto, Yasunori Nakayama, on Sept. 18.

“I cannot emphasize enough how much Norio is appreciated by his colleagues and the vast majority of his students, except the other ones who say he works them much too hard!” said York University President Emerita Lorna R. Marsden, when making a toast at the reception. Ota has also been congratulated by York President and Vice-Chancellor Mamdouh Shoukri for his achievement.