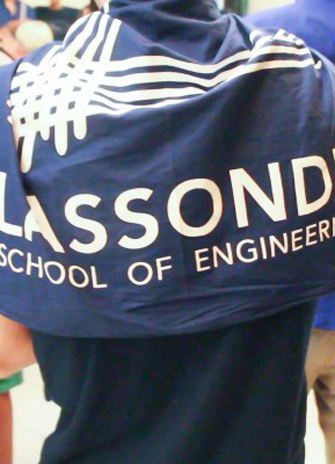 “We are excited to welcome new faculty members to our team. Each one of them is talented, energetic and full of new ideas. Four of the new professors have the title Assistant Lecturer, which means they will be focused on teaching and program development to further improve the learning experience of students,” said Lassonde School of Engineering Founding Dean Janusz Kozinski.

Lal Samarasekera earned his PhD at the University of Alberta, where he used numerical modelling to analyze the behaviour of tunnels and other excavations. Following his graduate research, Samarasekera worked as a researcher and instructor for more than 20 years in the field of geotechnical engineering. Prior to joining Lassonde this year, Samarasekera worked in industry as a consultant for SNC Lavalin and Golder Associates. His primary interest is engineering education, and in particular the use of technology including web-based teaching and learning.

Franz Newland obtained his PhD at Department of Aeronautics and Astronautics at the University of Southampton, U.K. His postdoctoral research was conducted at the Centre National d’Etudes Spatiales in Toulouse, France and focused on tracking spacecraft and debris near the geostationary arc using a fully-automated telescope based in Haute Provence. He is a member of the American Institute of Aeronautics and Astronautics (AIAA)’ Space Operations and Support Technical Committee, and an associate fellow of the AIAA. He worked on European Space Agency missions, at National Centre for Space Studies (Centre national d’études spatiales) ATV control centre and at COM DEV Ltd. in Cambridge on nanosatellite and microsatellite missions.

William Colgan received his PhD at the University of Colorado. He is currently serving on the International Glaciological Society executive council and the Canadian Cryospheric Information Network Advisory Council. His research has focused on glacier and climate interactions in the Arctic. He has been modelling the ever-changing glacial ice flow, using continuum mechanics and thermo-dynamics. Lately, his main preoccupation had been assessing glacier mass loss via satellite gravimetry. Most recently he spent three years working on the Geological Survey of Denmark and Greenland, helping to maintain a network of glacier and climate monitoring stations around the ice sheet.

Matthew Kyan earned his PhD in Electrical Engineering at  the University of Sydney. Kyan’s research focuses on the challenges in the efficient organization, management and analysis of media-rich datasets, while developing more natural and intuitive modes for associated human-computer and computer-mediated interaction. He won the Siemens National Prize for Innovation, Australia for his work with 3-D confocal image analysis. Prior to Lassonde he worked at Ryerson University where he was instrumental in establishing the Centre for Interactive Multimedia Information Mining (CIM2).

James Smith received his PhD in Mechanical Engineering at McGill University. He completed a postdoctoral fellowship at the University of Jena’s Institute for Sports Science in Germany. Smith’s research focus applies a background in robotics, biomechanics and 3-D printing to the development of dynamic human birth models. Prior to Lassonde, he taught at Ryerson University and at the University of Alberta where he won teaching awards. Smith was the recipient or co-recipient of four Institute of Electrical and Electronics Engineers’ (IEEE) Real World Engineering Project awards from 2007 to 2010.

Ali Hooshyar earned his PhD degree in Electrical Engineering at the University of Waterloo in 2014. He completed a postdoctoral fellowship at the University of Toronto’s Centre for Applied Power Electronics. His research interests include protection and control of renewable energy systems and smart grids. He focuses on the application of digital signal processing in power system analysis and the applications of power electronic converters in grid integration of wind and solar farms.

Hossam Sadek received his PhD in Mechanical Engineering at McMaster University. The focus of his research is developing an energy recovery system capable of capturing waste heat (thermal energy) from commercial and industrial applications. He designed a complex experimental facility to both visualize and obtain quantitative data for tube side convective condensation under the application of high voltage electric fields. In 2010, he won the MITACS Industrial Accelerate PhD Fellowship and completed a postdoctoral fellowship at McMaster University.