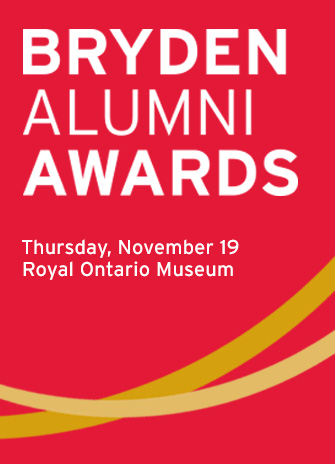 Each year, the Bryden Awards celebrate outstanding alumni who have achieved the extraordinary and made remarkable contributions to York University and the community. The four leaders who will be honoured Nov. 19 at a celebration at the Royal Ontario Museum are:

“With each new group of Bryden recipients, we are reminded of the endless possibilities that come with a York education – and this year’s recipients are no exception,” says Jeff O’Hagan, vice-president advancement. “Like Bryden recipients before them, our 2015 honorees inspire all of us through their outstanding achievements and leadership. These incredible York alumni have made major contributions to society and encourage the entire York community – students, staff, faculty, alumni and friends – to reach even higher.”

Hosted by York alumna Galit Solomon (BA ’00), the 2015 event features hors d’oeuvres, dinner, entertainment and more. Tickets are $100 each, with a discounted ticket of $50 for York students. Tables of 10 may be purchased for $850. Visit alumniandfriends.yorku.ca/bryden2015 for more information or to purchase tickets (note that space is limited for this event).

Sponsored by TD Insurance Meloche Monnex, the awards are named after the late Bruce Bryden (BA ’64), founder of the York University Alumni Association and the first alumni chair of the York University Board of Governors. A passionate member of the community for nearly 30 years, Bryden’s inspiring commitment, vision and contributions helped shape York into the vibrant and innovative university it is today.

This year, there are four categories of Bryden Alumni Awards, each of which honours a distinct set of achievements and contributions.

Outstanding Achievement: a graduate who has achieved distinction in his/her field and whose integrity and ability inspire alumni, faculty, staff and students.

For nearly 20 years, Bruce Lourie (MES ’87) has set himself apart as one of Canada’s pioneering leaders in the environmental sector, collaborating with businesses, NGOs and governments to solve issues relating to green energy, conversation, philanthropy and environmental hazards.

Lourie is president of the Ivey Foundation, a private charitable foundation in Canada, and a director of the Independent Electricity System Operator. He is also director of Philanthropic Foundations Canada and Canadians for Clean Prosperity. Lourie founded a number of for-profit and non-profit organizations, including the Summerhill Group, the Sustainability Network and the Canadian Environmental Grantmakers’ Network.

Lourie co-authored two best-selling books, including the internationally acclaimed Slow Death by Rubber Duck (2010). He has been recognized as a fellow of the Royal Geographical Society of Canada and is an honorary director of the Canadian Association of Physicians for the Environment.

Outstanding Contribution: a graduate who has dedicated his/her work to the advancement of York through exceptional service, commitment and/or contributions.

Doug Bergeron (BA ’83, Hon. LLD ’13) is a 25-year veteran of the financial technology industry, currently serving as founder and CEO of Opus Global and executive chairman of Hiperos.

In 2001, he led the acquisition of VeriFone from Hewlett-Packard in a transaction valued at $50 million. In 2002, Bergeron partnered with GTCR and embarked upon a strategy to aggressively grow VeriFone into a multinational company, operating in more than 100 countries, with an enterprise value of more than $5 billion.

Bergeron is a permanent member of the Council on Foreign Relations, a five-time delegate to the World Economic Forum in Davos, Switzerland, and has been a frequent guest on CNBC and Fox Business.

A longtime supporter of York, Bergeron, along with his wife Sandra, recently made a record-breaking $10-million gift to the University. The donation was the largest ever made to the University by an alumnus. In recognition of this exceptional and continued support from the Bergeron family, the recently completed Lassonde School of Engineering’s new home has been named the Bergeron Centre for Engineering Excellence.

In 2013, Bergeron was awarded an honorary doctor of laws degree from York.

Tentanda Via: a graduate who has demonstrated innovative, unconventional and daring leadership, and successes, reflecting York’s motto “the way must be tried.”

As Canada’s foremost eating disorder prevention researcher, Gail McVey (BA ’85, MA ’89, PhD ’95) is an internationally recognized expert in prevention science and its application to mental health interventions at all stages of life.

McVey is a psychologist and health systems research scientist at the Hospital for Sick Children, with an appointment as a senior associate scientist with the Research Institute. She is director of the Ontario Community Outreach Program for Eating Disorders, a community-based clinical training program in evidence-based treatment and prevention of eating disorders, where she led the development of a first-of-its-kind provincial network of specialized eating disorder service providers. She also serves as associate professor in the Dalla Lana School of Public Health at the University of Toronto.

McVey has carried out a 17-year program of community-based intervention research and published longitudinal studies on the prevention of eating disorders, linking her findings to public health practice and policy. Her program of research, supported by a Mid-Career Personnel Award from the Canadian Institutes of Health Research (CIHR) and an Ontario Mental Health Foundation Post-Doctoral Fellowship earned McVey the Paul Christie Memorial Prize in recognition of outstanding research carried out in the field of mental health. Throughout the cycle of intervention research, attention is given to program development, community capacity building and partnership development, as well as implementation and knowledge translation planning. McVey’s expertise has allowed her the opportunity to advise provincial resource centres, governments and provincial health authorities across Canada on matters related to mental health promotion and school-based mental health intervention research. McVey also provides expert input to public health practitioners, health educators, service providers, community-based coalitions and government on curriculum, program and policy development related to mental health, body image, eating disorders, healthy eating and healthy living.

McVey is the recipient of the US National Eating Disorders Association’s Lori Irving Award for Excellence in Eating Disorders Prevention and Awareness and has been distinguished as fellow by the International Academy of Eating Disorders in recognition of her distinguished contributions in research-based scholarship, clinical practice and advocacy. McVey’s leadership and expertise in the area of eating disorders has been formally recognized by the Ontario government – including the Ontario Premier’s Office and the Ontario Ministry of Health & Long-Term Care, and by her clinician colleagues who work within the provincial network of specialized eating disorder services.

One to Watch: a graduate who has made significant impact in his/her field and/or community within 15 years of a bachelor’s degree or 10 years of a professional/graduate degree.

By the time Michael Prosserman (BAS ’08), a.k.a. “Bboy Piecez,” was three years old, he was already standing on his head while watching Saturday morning cartoons. By high school, he was accepted into Cirque du Soleil, featured in the major motion picture Honey and travelling the world as one of Canada’s top breakdancers, winning more than 22 international competitions. Prosserman accomplished all this while overcoming a chronic neck condition and taking care of his mother who was suffering with a serious mental illness.

Prosserman is the founder and executive director of UNITY Charity, an organization spawned out of his own personal story of expressing stress. Today, UNITY reaches over 60,000 youth each year across Canada, empowering them to become positive and influential leaders in priority communities, using hip-hop as a vehicle for change. He currently runs and participates in a number of keynotes and workshops, and has shared his story with more than 100 audiences of all ages in places like Canada, Italy, Asia, the Arctic and beyond.

Recognized with a number of prestigious youth and community awards, Prosserman’s story has been featured in over 50 major media outlets, including Maclean’s, the Globe and Mail, the Toronto Star, the CBC, City TV news, Global TV news, Much Music and MTV.