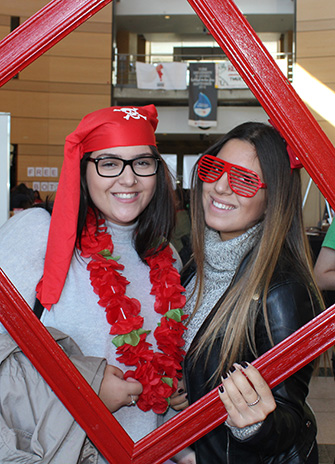 What’s red and white and proud all over? The hundreds of students, staff and faculty who joined in to celebrate York University during Thursday’s Red & White Day.

The annual celebration, which featured a day of activities organized to amp up school spirit and bring the York U community together, included a full roster of events at both the Keele and Glendon campuses.

The day kicked off with a campus alumni breakfast at Schulich, a coffee house and activities at Winters College, and a York U world map and flag game in Central Square.

Encouraged to sport York attire or wear the University’s colours of red and white, participants also wandered through Vari Hall to enjoy a free bagel breakfast, collect a York U water bottle, design a York U button, and pick up a new York U t-shirt for $10.

Around campus, there was live music to enjoy, as well as a pop-up carnival, a parade of food trucks, sports games and a barbecue at Vanier Field.

At the spirit rally, which kicked off at noon in the Student Centre, York U President and Vice-Chancellor Mamdouh Shoukri addressed the crowd and shared some of his personal insights on why the community should continue to celebrate York U and be proud of the institution.

“Everywhere you look, something exciting is taking place on campus. This summer, we hosted the hugely successful Pan Am and Parapan Am Games at our new state-of-the-art athletics facility. The new building for our Lassonde School of Engineering has now opened its doors, and the subway project is nearing its final stages on our Keele campus,” he said. “We continue to have more and more reasons to be proud.”

A new student centre will soon be another achievement to take pride in, he added.

Shoukri also spoke about the significance of his personal engagement with students, and said the President for Day event – which took place Tuesday – continues to be a point of pride for him.

“This event gave me the opportunity to be a York student for a day,” he said. “It’s something that greatly increases my own pride in the University.”

He encouraged students, staff and faculty to show their pride and to “share that with everybody.”

Sayjon Ariyarathnam, who on Tuesday swapped places with Shoukri and spent the day as York U president, also took the podium at the spirit rally.

He remarked on why events like the spirit rally are meaningful.

“I learned how important it is to be engaged in university,” said the fourth-year student who is pursuing a double major in criminology and human rights and equity studies.

He encouraged students to continue to get involved “so when you graduate … you can look back and smile at all the experiences you had here at York University.”

The more pride students feel, the more engagement there is, he suggested.

York U spirit continued to soar at the rally, with a performance by members of the Salsa Club, an impromptu “runway” show of red and white spirit with giveaways, a routine by the Hip Hop Dance Club and an invitation to join in on a salsa dance demonstration and the singing of the York U cheer.

The event also highlighted the University’s varsity athletes and celebrated the achievements of the women’s tennis team (who went undefeated last season) and York students who represented Canada in the Pan Am Games this summer.

A number of new initiatives were featured during this year’s Red & White Day and drew considerable attention. These included a screening of the student film Leftover which was shown in the Nat Taylor Cinema and followed with a Q&A with the writer/director.

Another popular first-time event was the #YUTweetup with the president. The Tweetup was an informal online meeting between Shoukri, his Twitter followers and members of the public. During the virtual event, Shoukri answered a wide range of questions. For a look at the event, refer to #YUTweetup on Twitter.

The day’s events continued until 6pm, with a variety of activities throughout campus, including exhibitions, trivia, jiu-jitsu and fencing demos and more.