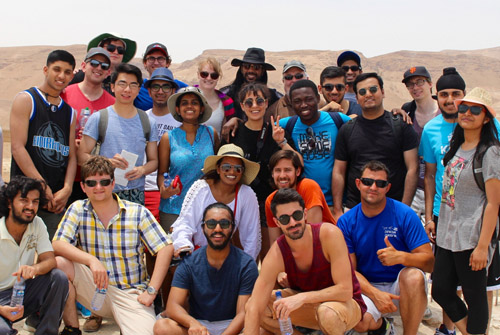 Above: The Lassonde School of Engineering students pose for a group photo during their summer trip to Israel

A diverse group of students from the Lassonde School of Engineering at York University embarked on a voyage of entrepreneurial discovery to Israel this past summer.

The undergraduate engineering and computer science students from Lassonde, along with one iBBA student from the Schulich School of Business, undertook an intensive program at the Technion-Israel Institute of Technology in Haifa. The experience included a two-day visit to the StarTAU entrepreneurship centre at Tel Aviv University.

“We were a group of 24 students and, within three weeks, we became a family. We lived together, ate together and we learned together,” said Amal Dave, a second-year Lassonde student who took part in the program. “We formed companies and came up with some amazing ideas within a short time, which was commendable to say the least. The country does have some magic, for I am sure it wouldn’t have been the same anywhere else.

“Those three weeks in Israel were probably the best of my life so far. We saw some amazing sights, we learned some very valuable lessons, and we formed some bonds that will last a lifetime. I wish everyone got a chance to experience something as beautiful as this at least once. It might seem otherwise, but life is short and opportunities like these don’t knock on your door frequently,” he added.

The students spent their first week learning the fundamentals of entrepreneurship and commercialization from Technion professors, CEOs and world-renowned experts.

They also learned practical lessons from Israeli entrepreneurial success stories – young and old – and from the architects of an economic model that’s often called the “Start-up Nation.”

They spoke with young Israelis, received advice about the opportunities for start-ups, and heard about the challenges associated with starting a new venture and bringing an idea to market.

“The summer experience at Technion has quickly become one of the flagship programs offered at Lassonde. The quality of academic instruction at this world-class institution is unmatched and the ‘dream it, do it’ culture of the society is infectious,” said the Lassonde School of Engineering Founding Dean Janusz Kozinski. “Most importantly, each one of the students returned inspired to see the world differently and ready to imagine their own entrepreneurial ideas to solve great challenges.”