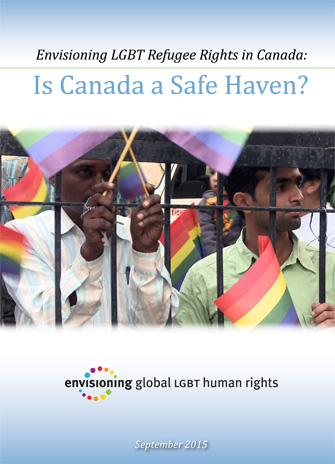 The challenges of leaving home and seeking asylum in Canada are compounded for lesbian, gay, bisexual and trans (LGBT) refugees by the requirement to prove their sexual orientation or gender identity within the drastically shortened timelines for refugee determination, according to a new report released Sept. 29.

The report Envisioning LGBT Refugee Rights in Canada: Is Canada A Safe Haven? is a collaborative effort by community groups and researchers at York University and other universities. It concludes that recent changes to the refugee system in Canada have had particularly negative implications for LGBT refugees, calls for significant improvements in Canada’s response, including better provision of services, and makes 37 recommendations for change.

“People of diverse sexual orientations and gender identities exist among all nationalities of the world. Yet in many countries they cannot be open about who they are due to prejudice and potential violence,” said Debbie Douglas, executive director of the Ontario Council of Agencies Serving Immigrants. “Many LGBT refugees are especially traumatized and vulnerable when they arrive in Canada; and the refugee assessment process may create further trauma and barriers for them, particularly when they are required to prove their sexual or gender identity. Often they do not have family and community support and encounter obstacles to accessing services”.

The report identifies as priorities the need for greater awareness and understanding of the unique issues facing LGBT refugees, both in the refugee claims process and in the provision of services. Among the specific recommendations are the following:

For more information on and to access resources, visit www.envisioninglgbt.com.

The report was produced by Envisioning Global LGBT Human Rights, a research project of community partners and York University. Community partners, who provide key services for LGBT asylum seekers in the Greater Toronto Area, organized focus groups with 92 LGBT refugees for the research. Envisioning Global LGBT Human Rights is an international research and participatory documentary film project, working to research, document and analyze issues of social justice and equality for LGBT (Lesbian, Gay, Bisexual and Transgender) people. The project is based at York University, Centre for Feminist Research, Toronto, Canada and is funded by a Social Sciences and Humanities Research Council of Canada (SSHRC), Community University Research Alliance grant, and conforms to Tri-Council research ethics guidelines. Additional funding for this report was also received from the Law Foundation of Ontario (LFO).

While financially supported by SSHRC and the LFO, the findings of this research do not necessarily reflect the views of SSHRC and the foundation.