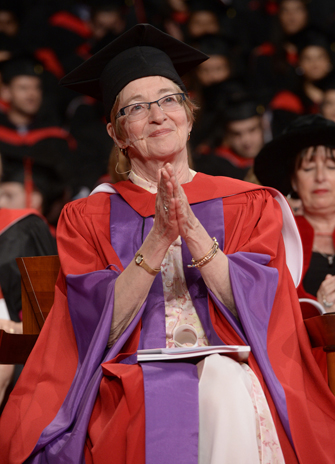 On Sept. 29, Maude Barlow, the national chairperson of the Council of Canadians, will present a special lecture marking the launch of “Our Blue Future,” a series of events that focus on water.

The timing of this event is not coincidental, as York University has recently phased out the sale of single-serve bottled water on campus.

“York University is now a bottled-water free campus. In line with the United Nations resolution recognizing the human right to water, this is a demonstration of York’s commitment to social justice and social responsibility,” said Professor Martin Bunch, chair of the President’s Sustainability Council. “Recognized as one of Canada’s Greenest Employers for the past three years, this event is one of many initiatives that exemplifies York as a leader in sustainability in higher education.”

Barlow is an activist who has dedicated her career to the protection of global water resources. She has served on numerous non-profit boards, and was also the senior adviser to the 63th President of the United Nations (UN) General Assembly. As part of this role, she was a leader in the campaign to have water recognized as a human right by the UN, which was passed as a resolution in 2010. In her role at the Council of Canadians, Barlow advocates for the protection of water resources, here in Canada and globally. In recognition of her distinguished career, Barlow was awarded an Honorary Doctor of Laws from York University in 2014.

There will be a number of ways to participate during the day:

• Two documentary films, The Story of Bottled Water and Tapped, will be screened in the Nat Taylor Cinema from 12 to 1:30pm, which will be immediately followed by a panel discussion on water led by Barlow.
• From 4:30 to 6:30pm in Accolade West 206, Barlow will deliver a keynote address titled “Protecting Canada’s Blue Future: How Bottled Water and Other Corporate Abuses Threaten our Water.” There will be a book signing immediately following the keynote address.
• At both the film screenings and keynote address, students from the Faculty of Environmental Studies will be creating a participatory art installation made from single-serve disposable water bottles.

These events are also part of the ongoing Faculty of Environmental Studies (FES) Speakers Series and admission is free of charge. University community members are encouraged to RSVP online at fes.yorku.ca/water to reserve seats for the film screenings and keynote address.

The move to limit the sale of bottled water on campus began in April 2012, when President and Vice-Chancellor Mamdouh Shoukri in collaboration with the York Federation of Students, pledged to phase out the sale of single-serve bottled water on campus by September 2015. During the ensuing phase out period, the Office of the Vice President, Finance & Administration, oversaw a process that assessed the University’s drinking water infrastructure, added new water refill stations, and refurbished old drinking fountains. The University now has more than 70 refill stations and 200 drinking fountains across the Keele and Glendon Campuses.

“Our Blue Future” featuring Maude Barlow, is sponsored by the President’s Sustainability Council, the Office of the Vice President Finance & Administration, FES, the Executive Learning Centre at the Schulich School of Business, the Underground Campus Kitchen, York University Food Services, and the York Federation of Students.

You can learn more about bottled water at York University by visiting bottledwater.info.yorku.ca.