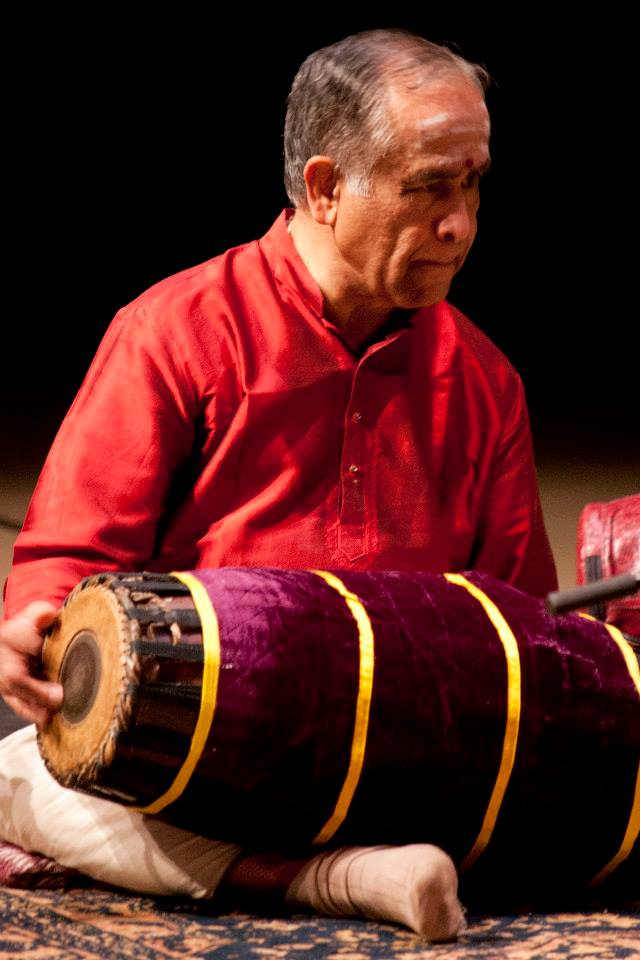 World-renowned mrdangam virtuoso Trichy Sankaran recently retired from York University Department of Music after an illustrious 44-year teaching career. On October 1, he returns to campus to deliver a parting gift: a showcase performance at 7:30pm in the Tribute Communities Recital Hall, launching the 2015-16 Faculty Concert Series.

Sankaran will present “Rhythms of India”, a riveting program of works rooted in classical South Indian music and bridging east and west, and traditional and contemporary styles. He will share the stage with his daughter, vocalist and York music alumna Suba Sankaran (BFA ’97, MA ’02), leader of the Juno-nominated Indo-jazz-funk fusion ensemble Autorickshaw, and her bandmates, bass guitarist Dylan Bell (BFA ’95) and tabla player Ed Hanley. The musicians will perform solo and ensemble pieces, including original compositions by the master percussionist.

The concert will be prefaced by a screening of Trichy Sankaran’s Musical Journey, a short film directed by the artist and produced by Evan Ritchie, assisted and narrated by Suba Sankaran. Using performance and teaching footage from his archives, the film offers a visual overview of Sankaran’s multifaceted roles as performer, teacher, scholar, composer and collaborator.

“It’s been an enormous pleasure to work with such a dedicated teacher and remarkable musician as Trichy,”said William Thomas, chair of the Department of Music. “York University has been exceptionally fortunate to have benefited from his artistry and expertise for over four decades. His influence extends beyond world music to the many jazz and classical music students who took his courses out of curiosity and left with a love for the complex Carnatic rhythms and a deeper understanding of Indian culture.”

Sankaran joined York’s Department of Music in 1971 as a founding director of Indian music studies, one of Canada’s first university-based world music performance programs. Over the years, he has fused eastern and western pedagogical practices and has been a major influence on a generation of students, many of whom have gone on to become noted performers, composers and educators. His contributions to his field extend beyond the studio and stage, encompassing many scholarly conferences and two textbooks on South Indian classical drumming, most recently The Art of Konnakkol (Solkattu) published in 2010. His outstanding achievements as an educator have been recognized with the OCUFA Award, given by the Ontario Confederation of University Faculty Associations for teaching excellence.

As a musician, Sankaran is internationally renowned for his rhythmic dexterity, tonal nuance and consummate mastery of the mrdangam, the traditional two-headed drum of South Indian classical music. With a concert career spanning more than 50 years, he has appeared at major festivals on four continents. He has performed with all of India’s classical music masters as well as jazz and electronic ensembles, gamelan and other world music groups from many different cultures, as well as his own ensemble, Trichy’s Trio.

Admission is $15 for the general public and $10 for students and seniors. For ticket information, contact the Box Office online or call 416-736-5888.