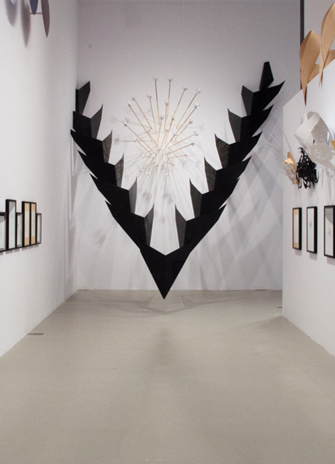 A vignette from the AGYU’s fall exhibit

On Sept. 23, Griffith opens Symbols of Endurance at the AGYU, his first solo exhibition in Canada. This exhibition reconfigures the material artifacts of the procession into new constellations of abstract and symbolic forms. At the same time, it stages the processional as a proposition toward innovating forms of participatory and performative exhibition design. The exhibition opens with a free public reception Sept. 23 (tonight), from 6 to 9pm, and continues to Dec. 6. Symbols of Endurance is curated by AGYU Assistant Director/Curator Emelie Chhangur.

Beginning his career as a “Mas man,” Griffith’s current work is based upon a reciprocal dialogue between “Mas” (the artistic component of the Trinidad Carnival) and socially-engaged contemporary art practice as a means to investigate the phenomenological aspect of embodied experience while interrogating contemporary visual culture outside the traditional pitfalls of representation. Often taking shape as processions or immersive installations, Griffith’s artistic compositions are stripped down to their basic forms and abstracted into new ritual dramas. They are indeed symbols that endure in the imagination of participants and spectators long after the projects are finished. Symbols of Endurance thus picks up where Ring of Fire left off and continues its movement, providing a synesthetic experience for viewers while tracing the project’s trajectory through a thorough staging of original source material, sketches, technical drawings, and maquettes that informed the creation of “Toronto’s procession”. The exhibition also features stunning drone documentation of this unprecedented cultural manifestation and new cast bronze works produced over the summer during the Louis Odette Sculptor in Residence Program at York University.

Griffith’s exhibition is not the only symbol of endurance for the AGYU this fall as the gallery marks 12 years of its popular program known as The Performance Bus. To celebrate, one of Toronto’s most celebrated artists, Sandra Brewster presents In Going Down Memory Lane. In this interactive experience, Brewster brings a Diasporic re-mix of all the songs from the 70s that remind her of her childhood. In honour of the Caribbean communities of that came to Toronto in the 70s, she recreates the social circumstances that folks orchestrated in search of new communities that bridged back home. The free Performance Bus departs OCADU, 100 McCaul St., in downtown Toronto on Wednesday night at 6pm, returning downtown at 9pm.

Moving out of the gallery and back to the colonnade along the Accolade East Building, gallery goers can march past Alejandro Tamayo’s commissioned installation for AGYU Vitrines. Magically making the invisible qualities of the surrounding space visible, Tamayo creates his work out of thin air. With an electronic ambient thermometer, his work follows the rise and fall of the heat produced by the invisible forces of movement and the performance of both human and non-human activity in and around this equally “invisible” artwork. This minimal gesture, revealed only by a fluctuation in the numeric digital display, challenges the interpretation of the ordinary and points to the extraordinary unseen changes in our environment— subtle forces of the unknown—and shows us how are bodies affect and are affected by everything that surrounds us.

Mixing the performance of spoken word and the movement of choreography, and bringing back some of the Ring of Fire youth collaborators from Jane-Finch and Regent Park, AGYU’s ongoing radical pedagogical program takes on a new direction this fall. Another epic engagement beginning in September and continuing through to June 2016, Spotlight: Youth Artists Take Centre Stage engages 20 youth from Jane-Finch based Success Beyond Limits (ages 14 to 18) through bi-weekly workshops led by emerging spoken word poets Zeinab Aidid and Kareem Bennett and emerging choreographers Destiny Henry and Nathaniel Mitchell.

Editor’s note: The Ring of Fire website contains a wealth of images documenting each stage of the event and the participation of the many community partners. There’s also a Ring of Fire Instagram that offers a dynamic visual story of the work as it progressed toward the Aug. 9 parade. Visit the AGYU’s Instagram account at https://instagram.com/a_g_y_u/.