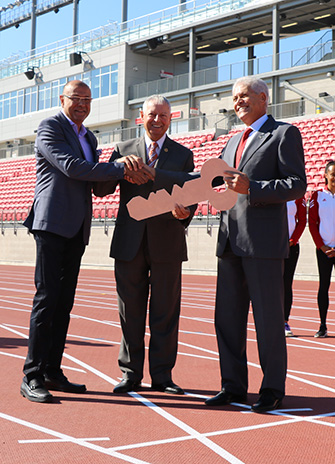 The handover marks the completion of a successful collaboration, which saw York University welcoming thousands of athletes from 41 countries in the Americas and the Caribbean this summer as a host venue for the track and field portion of the Toronto 2015 Pan Am/Parapan Am Games.

Canada has had the honour of hosting the games twice in the past, but the Toronto 2015 Pan Am/Parapan Am Games were a first for Toronto and a first for York U.

The York Lions Stadium is a multi-million dollar Tier 1 Track and Field facility that is a legacy of the Toronto 2015 Pan Am/Parapan Am Games. It will be a training and competition venue for York Lions  athletes and larger events in track and field.

The Pan Am and Parapan Am Games are the world’s third largest international multi-sport games, held every four years immediately before the Olympic and Paralympic Summer Games.

In addition to hosting the track and field portion of the games, York University also hosted the tennis competition in the Aviva Centre (Canadian Tennis Centre).