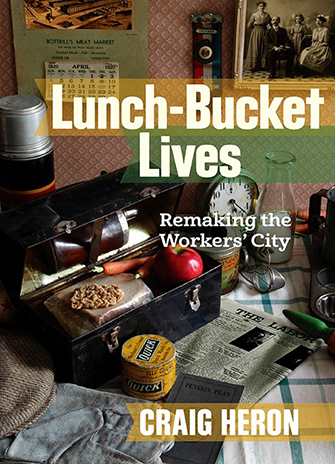 History Professor Craig Heron reveals the realities and struggles of the City of Hamilton’s working class in his new book, Lunch-Bucket Lives: Remaking the Workers’ City.

In Ontario, between the 1890s and 1930s, “Hamilton worshipped the factory,” says Heron, and taking lunch buckets to work was a metaphor for workers’ lives. In this container, not only did they carry food, but they may have also carried subversive literature, tobacco or illicit alcohol, he adds.

“When you open your lunch bucket to sit down and have lunch with your workmates, you’re engaged in a moment of liberation from the factory environment where you’re all sitting around talking about big issues, minor issues and gossip. The lunch bucket symbolizes the restrictions of the life, that hard metal container, but also the possibilities, hopes and aspirations,” he says.

Their hopes and aspirations led them to cling fiercely to family and resist the societal changes forced upon them. By focusing on working-class families as the backbone of the city, Heron looks into how they lived under and navigated massive societal change by analyzing their domestic life, changes in the workplace and with healthcare and how they interacted as a community.

“Most importantly, they tried to keep their distance from a lot of changes,” Heron says.

For example, moms would resist taking their newborns to clinics and hospitals for valid reasons, and many workers would quit their jobs at new mass production factories, he says.

“That surprised me because there was a real consistent attempt to maintain some working class independence from major changes or to renegotiate change on terms more favourable to workers,” he says.

By the end of the First World War, Hamilton’s working people did not want society to function as it had before the war.

“When they had the opportunity, they vigorously pushed back to say, ‘We want a different kind of world,’” says Heron. “They struggled to form new unions. From the intensity of that, the independent working class political movement emerged, the Independent Labour Party movement, which swept all the elections in the fall of 1919 and formed the administration popularly known as the Farmer Labour Government at Queens Park. That was the first time there was a third party government in this country.”

What also prominently comes through in the book “is the importance of the working class family cooperating together to make everything happen,” says Heron, who describes Hamilton’s residents as “tough, determined and proud.”

“It was an era in which the family was the basic unit of social security because there wasn’t much else. It was an incredible strain, especially on the wives and mothers,” says Heron. “There was no Medicare. All this really reinforced their sense of determination to survive, to make a good life in these hard, constraining circumstances. That’s what kept them going, made it possible to get up every day and aspire for something better.”

He says, “The book tries to show the significance of the working class in society, what kind of contribution they made and what their experience was in a very complex way.”