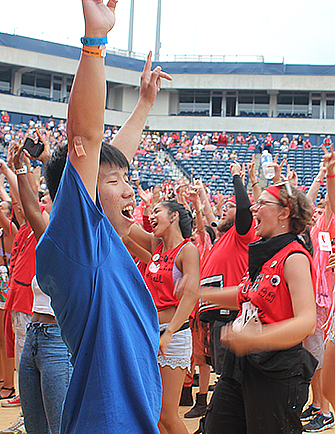 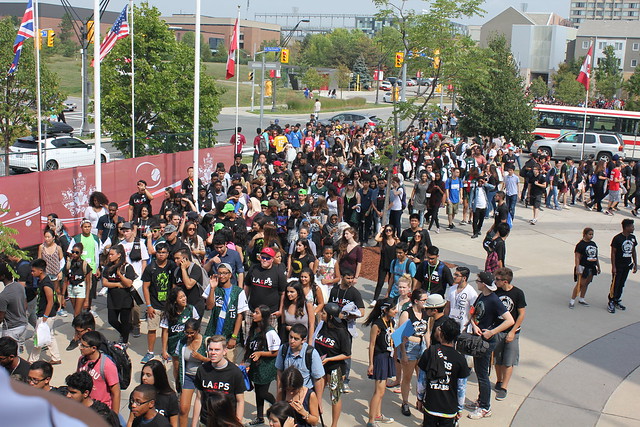 It’s an exciting time to be joining the York University community, and thousands of new students heard all of the reasons why during the New Student Convocation held Tuesday afternoon at the Aviva Centre.

The event was new this year and ran as part of York Orientation Day, which also included an academic orientation, a presentation on consent and a pep rally.

The New Student Convocation was designed to officially welcome incoming students, and put emphasis on the first-year experience.

The ceremony kicked off with the piping in of York University President and Vice-Chancellor Mamdouh Shoukri, along with vice-presidents, deans and others who were dressed in full academic regalia.

Shoukri spoke to students about the excellent choice they made in selecting York University, not only for academics but their growth as individuals.

“You have chosen to join a dynamic, diverse community,” he said. “You will enjoy years of growth and years of discovery.”

Over the next few years, students will be immersed in a “particularly transformative time at the university,” he said, with the building of two new subways, a state-of-the-art engineering building, and a new campus in Markham.

He also touched on the success of students at York University, as well as those across the province, citing a new study released last year that indicates Ontario university grads are getting the best jobs and the best pay.

Every day, members of the York University community are changing the world, he said, through research, teaching excellence, community service and leadership.

“I hope you will discover here a thirst for knowledge, and a desire to make change,” he said.

Vice-President Academic and Provost Rhonda Lenton also addressed the students and reinforced the importance of involvement both in and out of the classroom. She also spent some time explaining the role of the deans, and what they do to make York University progressive and distinct.

Tips for success were offered to students by Vice-Provost Students Janet Morrison, who agreed involvement will lead to an enriched experience. She also suggested students explore the campus, learn about the University’s resources and stay focused on their purpose.

Professor Emeritus Greg Malszecki took the podium to read a touching poem from Priscila Uppal, celebrated writer and York U professor of humanities.

The poem, titled “From a Professor to a Student at the Start of the Year”, offered students useful advice about starting school and how to get the most out of the experience.

A particularly moving line from the poem – “I won’t teach you to conquer the world, but I will teach you to open the doors” – gave students a picture of the endless possibilities of an education.

Closing out the New Student Convocation was guest speaker Gerry Dee, a York U alumnus and recognized comedian and entertainer.

Dee’s advice to new students was to live in the moment, and take action. He shared his own experience at York, and confessed that attending the University was not his first choice, but enrolled so he could live at home and save money. He spent his first year commuting to campus, feeling like he was missing out on the university experience his friends were having.

But, he said, part way through his second year he realized he had the ability to take control of those things.

“I decided to take action on these things I thought I was missing,” he said.

Dee joined intramurals, and spent more time on campus meeting people, and realized that “any university you go to is what you make of it.”

He also emphasized the importance of keeping an open mind with academics, and shared that while at York he started in business administration, moved to geography and finished in kinesiology.

“I am using not one of the things I studied,” Dee said, “but things will find a way of working out for you.

“I’m very proud to have graduated from this school.”

As part of the New Student Convocation first-years experienced the annual You Had Me At Consent presentation on healthy relationships.

The final segment of York Orientation Day was a Lions Pride pep rally featuring a variety of musical and dance performances from student organizations.